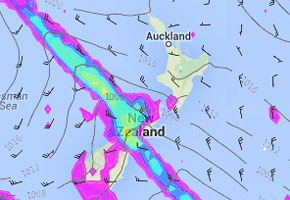 The weather this week is dominated by a westerly airflow, roughly this means warmer temperatures for eastern regions of both islands while cloudier weather persists in the west with rain at times. On Wednesday a front moves through both islands bringing cooler temperatures and showers or rain to most areas. Thursday brings a brief clearance as a ridge moves in then on Friday westerlies build again with another front moving onto the South Island later in the day.

For todayâ€™s weather check out this morningâ€™s forecast here.

On Tuesday the weather remains mostly settled for the North Island although expect areas of cloud in the west particularly in the morning where there could be some fog. The Bay Of Plenty and east coast is likely to have sunny clear conditions
with light winds and warm temperatures. Northerlies about Wellington will build
during the day.

About the South Island conditions are warm in the east with some developing high cloud and northwesterly winds, cloudy in the west with rain. Cloudy about Southland with spots of rain, more persistent from midday
then overnight a southwest change moves in.

On Wednesday the main feature for this week moves right over the country, a front pushing in from the
southwest which starts about the lower South Island early in the morning then
reaching the upper North Island around midnight. Northwesterlies build about the
North Island with skies becoming cloudy in the morning out west, showers move
into Taranaki through to Wellington in the evening then further north around
midnight. Showers also spread north along the east coast around
midnight.

For the South Island heavy morning rain in the west eases to
showers with a southwest change. Showers spread north along the east coast
during the day with high cloud beforehand and milder temperatures, showers clear
overnight.

A brisk to strong northwesterly airflow lies over the country on
Friday, cloudy in the west of the North Island with the odd light shower
possible from afternoon, dry out east with some high cloud and sunny spells. For
the South Island expect heavy rain in the west then easing overnight, high cloud
out east with warm temperatures and gusty northwesterlies. Southland looks
cloudy with rain, patchy showers about Otago. 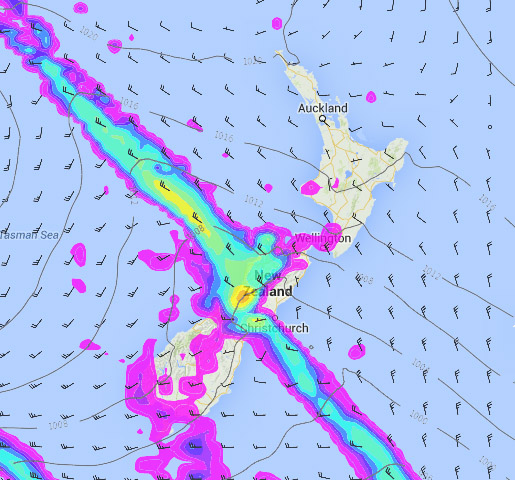 A few observations for the past 4 years. We moved to NW Auckland in 2010. Frosts that year in our valley = 21. in 2011, 12 frosts, in 2012, 6 frosts, last year was 1 and then a partial frost. Jun 2012 – warmest on record i think.  May 2013, warmest on record. Apr 2014, warmest on record.(soon to be followed by May i would think) The climate here is changing – The lack of cold means the wasps and all the nasty critters are not being wiped out over winter. My Braeburn apple tree has blossomed twice since harvest in Feb/Mar. Our winters only require a summer weight duvet, and in summer now, we are hot and humid. So, unfortunately it looks like we will be the Brisbane of NZ in 2030 as someone predicted!