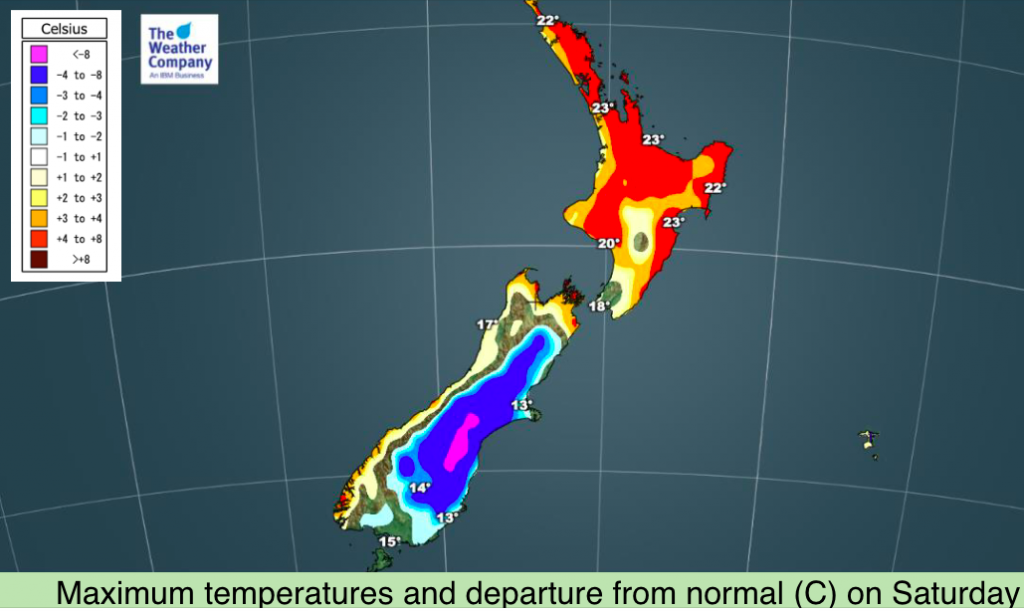 A heavy rain event out of Australia and partially fuelled by the sub-tropics will impact the West Coast over the coming days, with a cold change coming by Saturday in the south.

The narrow but slow moving area of rain looks set to ‘park’ itself over part of the West Coast, at this stage in central areas closer to Hokitika.

Over 200mm is forecast to fall within 3 days. This is quite a bit, but for the West Coast it should be mainly manageable if spread over those days. However there is the chance for localised slips, flooding and even road closures.

There will also be spillover into Canterbury – it’s hard to be precise with rainfall totals when it’s coming over the Southern Alps first, but your local www.RuralWeather.co.nz forecast has the most accurate rainfall data in NZ (powered by IBM). This data takes into consideration the ranges and various computer models and crunches the rainfall numbers (every single hour) for your hyper-local part of NZ.

Temperatures also tumble on Saturday as a southerly change moves up the South Island. Daytime maximums will be more than 8 degrees BELOW normal for parts of Canterbury and several degrees below normal for many other southern and eastern areas.

In contrast, the North Island continues to lean several degrees warmer than average for many regions (by day and night) and leans drier than normal next several days ahead (although showers more likely next week as a weak southerly moves around Tuesday).