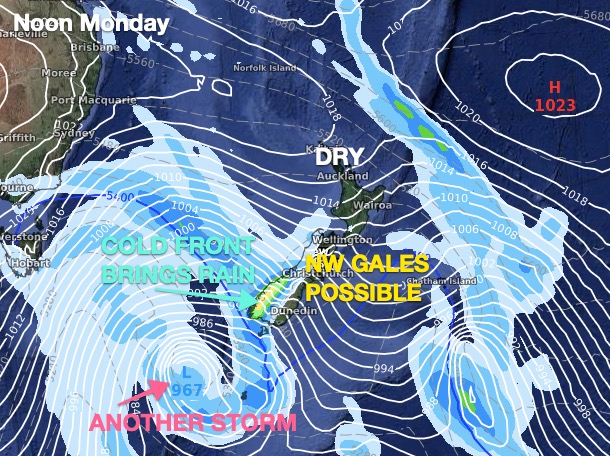 We’re at that moment when the summer weather pattern is leaving us and the winter one is coming in. That’s what Autumn is all about, but it has been very slow going this year.

But that is now changing with a cold blast moving up NZ this week – and another couple more big lows coming in this weekend, along with more severe weather risks.

This weekend is classic Autumn with a storm in the Southern Ocean the main feature. “We have a decent low pressure system just south of the South Island this weekend, followed by another storm system in a similar place a couple days later on Monday” says head forecaster Philip Duncan. “Both of these storms have central air pressure down around 965 hectopascals (hPa) which means they have enough grunt to drive in gale force winds through some regions, heavy rain on the West Coast, snow on the mountains and dredge colder air into the NZ region – but also a continuation of the drier pattern for the very north of NZ and north east”,

Duncan says colder air will dominate the lower South Island over the next week while northern NZ will be more changeable, on the outer edges of these Southern Ocean storms. “Places like Dunedin have a bit of a bleak week coming up with highs only making single digits at times”,

WeatherWatch.co.nz will have more details about this weekend’s set up (and the start of next week) in our next weather video out on Wednesday morning.