Week in Weather – What’s Been Making Headlines this Week? 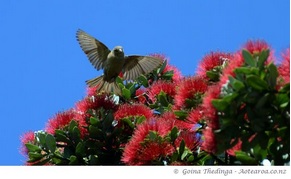 The week has been dominated, and rightly so, by the news coming out of the USA – of some of the coldest temperatures ever recorded in many parts, after the country was hit by a polar vortex, bringing ice storms, snow and freezing conditions to more than two dozen states.
Flights were cancelled, roads, schools and businesses closed, and chaos reigned supreme in the vortex’s wake this week. Weatherwatch Head Analyst Philip Duncan wrote an extrememly interesting and informative piece on polar vortexes – and why New Zealand could well experience something similar at some point in the future. CNN International senior meteorologist Brandon Miller answered some reader questions about the vortex in this article too, which is well worth a read.

The UK didn’t escape unscathed either, it was in the firing line of “Winter Storm Hercules”, which brought high winds, and waves up to 27ft (8.2m) crashing into the coast – a result of the same weather system which caused havoc in the USA.  Severe flood warnings indicating there is “danger to life” were declared for the southwest English counties of Gloucestershire and Dorset, and for Wales. Northern Ireland capital Belfast avoided the serious flooding that residents had feared after a tidal surge failed to breach flood defences.

All of this extreme weather was causing some of our readers to ask: ‘What’s the coldest/wettest/hottest it’s ever been?’ In an attempt to answer this question, and many others, we published a list of weather records compiled by Guinness, and it’s well worth a look if you have a minute!

At the end of the week, there was further tragedy, as 3 beachgoers in Argentina were killed by lightning, and 22 others injured by strikes in the seaside community of Villa Gessell, located about 230 miles (375 km) southeast of the country’s capital, around 5 p.m. Thursday.

Meanwhile, at home, all of this news of extreme weather elsewhere has somewhat overshadowed a pretty innocuous start to the new year in New Zealand. Summer 2013/14 is shaping up to be one of massive regional differences with some people wanting to know ‘when summer will start’ compared to those desperately asking about ‘when rain will fall, we only have 3 days of water left’. Check out Philip Duncan’s regional weather roundup, here.

What has the week been like at your place? Let us know in the comments, or check out our Facebook page!