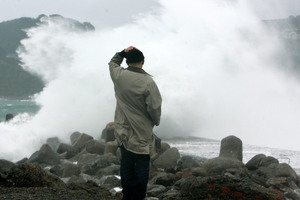 The first (partial) week of 2014 has certainly been a busy one, with many holiday makers forced inside at the start of the week, as torrential rain, high winds, and even a reported tornado caused chaos across the country, bringing slips, floods, evacuations, and damage to property. The Thames-Coromandel area was hit particularly hard by thunderstorms and torrential rain, causing widespread surface flooding. Police in Waikato urged motorists to remain cautious and expect delays due to dozens of slips and floods. Check out some astonishing video footage at one camp site in Cooks beach, here.

In a spot of good news, after 10 days stranded far from home, all 52 passengers from a ship stuck in Antarctic ice have now been transferred by helicopter to an Australian icebreaker. “It’s 100% we’re off! A huge thanks to all,” tweeted Chris Turney, an Australian professor among the group of scientists, journalists and tourists marooned on the ship. A helicopter from a nearby Chinese icebreaker ferried passengers Thursday to the Australian icebreaker, the Aurora Australis. The rescue is the latest chapter in a saga that began Christmas Eve after the Russian-flagged MV Akademik Shokalskiy got stuck in unusually thick ice.

El Salvador’s Chaparrastique volcano erupted Sunday, sending a dark cloud of ash miles into the sky, forcing thousands to evacuate from their homes and snarling travel in the Central American country as airlines canceled flights. According to the Ministry of Environment and Natural Resources, the eruption began at 10:30 a.m. and produced a column of gas and ash approximately 5 kilometers (3.1 miles) high. Authorities warned residents not to approach the area near the volcano, which is located in eastern El Salvador.

In what seemed initially like disconcerting news, the sun has fully “flipped upside down”, with its north and south poles reversed to reach the midpoint of Solar Cycle 24, Nasa has said. Now, the magnetic fields have once again started moving in opposite directions to begin the completion of the 22 year long process which will culminate in the poles switching once again. It’s nothing to be alarmed about, and to mark the event, Nasa has released a visualisation of the entire process.

A new study warns we could see global temperatures rise by 4C by 2100 and potentially more than 8C by 2200 if carbon dioxide emissions are not reduced, according to a major climate change study published earlier this week. The Australian study, which is in the journal Nature, found global climate is more sensitive to carbon dioxide than most previous estimates. The research also appears to solve one of the great unknowns of climate sensitivity, the role of cloud formation and whether this will have a positive or negative effect on global warming. In New Zealand, four degrees of warming would mean extreme rainfall events would increase by more than 30 per cent, marked drying everywhere in summer, and varying and widespread impacts on agriculture.

In news closer to home, the spring-like weather pattern that is bringing a mixture of smiles and frowns across the nation so far this summer looks set to remain in force over the South Island and lower North – but the end is in sight. WeatherWatch.co.nz provides detailed monthly reports for dairy giant Fonterra, breaking down the weather forecast week by week, region by region – and the conclusion is this: Summer slowly gets going in January. Check out the details here.

And we finished off the week with some…predictable news – Wellington has been battered by violent wind gusts, in some cases up to 140km/h, damaging powerlines and properties, disrupting flights and prompting a warning to drivers. Severe wind warnings have been issued, as gale northwesterlies of up to 140km/h hit Wellington, Wairarapa and Marlborough.

It looks like 2014 has picked up where 2013 left off – some incredible weather to be seen both here and abroad. Keep up to date with all the weather coverage here on the site, and let us know what 2014 has started like at your place in tomorrow’s poll.

I smile at the continued “global warming” predictions while those who were trapped in the ice they said was melting and the US is in for yet more freezing temps and blizzards, and the UK has had it’s fair share too.

Time for the warmists to give up? No the world is no longer flat.

You smile in blissfull ignorance