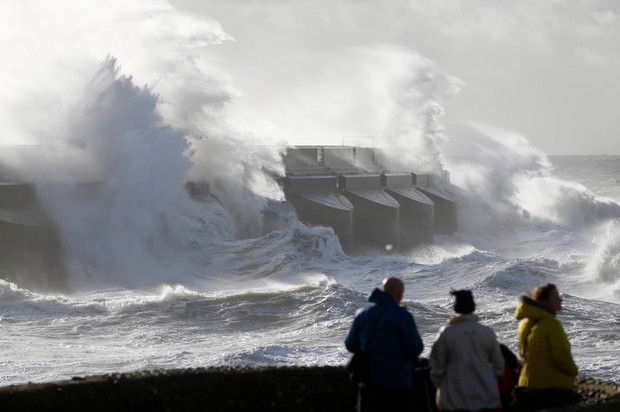 A quieter week in our part of the world, but not so for our friends in Europe this week, as a fierce storm caused widespread chaos throughout parts of the UK, France, the Netherlands and Belgium.

Weatherwatch tracked the storm as it approached the UK, warning of severe gales across southern England and South Wales and storm force winds across Cornwall and southern Devon with peak gusts 130 to 150km/h around the coasts, along with detailed and extensive weather maps of the area. When it did make landfall, it knocked out power to more than 220,000 homes in England alone, as well as disrupting road, rail and air travel around the country. The death toll throughout all of Europe sat at 17 in the days following, andas the cleanup began in the wake of the storm, British Prime Minister David Cameron described the loss of life as “hugely regrettable”.

Closer to home there was a further tragedy, as two climbers died on Mt Taranaki, after being trapped for two nights in the bitter cold. Alpine rescuers found both climbers, 29 year old Nicole Sutton, and 31 year old Hiroki Ogawa, after a weekend spent lost in freezing conditions on the north-western side of the mountain. Two other climbers who were also stranded on the mountain, John Salisbury, 65, and a 38-year-old woman, managed to walk down by themselves on Sunday morning. They were taken to hospital with mild hypothermia and minor cuts and bruises.

In light of recent travel delays around the country, our very own Philip Duncan mused on 10 tips for enjoyable air travel – and you should take his word for it, because he’s a serial airport hopper.

In Norway, a village which sits in nearly total darkness for 6 months of the year came up with a supervillain-level scheme to brighten the place up: giant mirrors. In what sounds like the rejected plot of a Roald Dahl novel, villagers in the small Norwegian settlement of Rjukan, decided they were fed up with bumping into things for half the year, and proceeded to erect three giant mirrors on the surrounding mountains, reflecting the sun’s rays below. Check out the story here.

As the summer highs slowly slide southwards over the country, regions in the north are now starting to dry out. Farmers and gardeners in both Auckland and Northland are telling WeatherWatch.co.nz that conditions are now becoming very dry. Check out the thoughts of Head Weather Analyst Philip Duncan, here.

What are your thoughts on the week? Let us know in the comments, and remember to vote in this week’s poll – coming Sunday at 2pm!

P.S: Halloween was on Thursday, and the graphics team at Weatherwatch had a little fun with the forecast for that night…