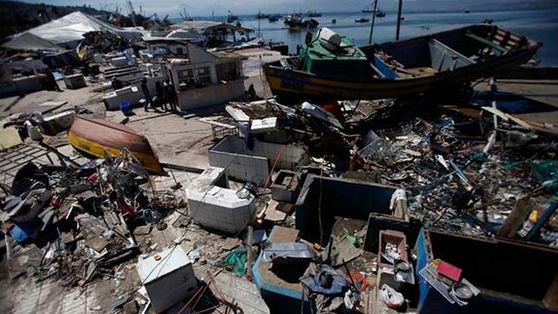 What a chaotic week! Events around the world have been crazy – from tsunamis and earthquakes, to floods, with hailstorms in between – while back home we’ve seen conditions return to wintry status in some parts of the South Island.
Tragedy has struck too – with fatalities in the double figures as a result of the Chilean earthquake and tsunami, we will keep our readers up to date with the latest as we can on that situation.

Let’s start in Saudi Arabia, where tragedy struck after heavy rains and a dust storm caused a crane to topple Friday evening (Sat morning NZT) at one of Islam’s most important mosques — Mecca’s Masjid al-Haram, or Grand Mosque.
The disaster killed at least 87 people, injuring more than 200 others, Saudi Arabia’s civil defense authorities said after the incident.
A strong thunderstorm popped up over Mecca about 4 p.m. local time Friday (9 a.m. ET), bringing gusty winds which shifted direction, causing the huge crane to topple.

Japan was also in the headlines for the wrong reasons this week, as more than 3 million people were ordered to evacuate after heavy flooding killed three people, and left 16 missing in the eastern region.
At least 27 people have been injured across 10 prefectures since floods inundated parts of eastern Japan after a tropical storm, the Fire and Disaster Management Agency said.

Staying in Asia, and China this week confirmed it plans to send a spacecraft to land on the moon’s “dark side” before 2020, state media reports — a mission, which, if successful, would make it the first country to do so.
The mission will be carried out by the lunar probe Chang’e-4, Zou Yongliao, a scientist at the Chinese Academy of Sciences said at a deep space exploration forum on Tuesday.

China plans to land a spacecraft on the â€œdark sideâ€ of the moon, something no country has done http://t.co/brgiGbea2o pic.twitter.com/PxiUEDxrwG

Over in the USA there was more tragedy this week, as eight people died and five others were missing, after a flash flood washed away vehicles at the Utah-Arizona border, the Hildale, Utah, fire department said.
All the victims were mothers and small children, Assistant Fire Chief Kevin Barlow said. The youngest child was about 4 years old.
The flooding ravaged a community that straddles the border from Hildale, Utah, to Colorado City, Arizona.

A little closer to home, two Australian states saw freezing cold and stormy conditions this week – as firstly Adelaide’s streets were blanketed in white, after hail rained down across the city and Hills, while heavy rain caused flash flooding in some areas.
The State Emergency Service worked into the night on Wednesday to respond to more than 170 callouts to storm affected homes and businesses across Adelaide.

Meanwhile, severe storms on the New South Wales Central Coast left a thick blanket of hail covering roads and causing power disruptions to hundreds of homes to finish the week.
The NSW State Emergency Service (SES) on Thursday received more than 100 requests for help across the Central Coast and Hunter regions, including six flood rescues.

And finally, the news which dominated most headlines on Thursday and Friday, as a powerful 8.3-magnitude earthquake struck off the coast of Chile, triggering a nearly 16-foot wave on the shore in the Coquimbo Region.
About 1 million people evacuated ahead of the tsunami wave. Authorities said at least 10 people died and one person is still missing as of this morning.
Tsunami warnings for New Zealand were cancelled on Friday, though looking at this energy map of the way waves fanned out from the epicentre of the quake certainly proved a reminder for some – as it became clear just how exposed the country is to large waves as a result of seismic activity.

The quake hit Wednesday night (Thursday NZT), with its epicenter 46 kilometers (29 miles) west of Illapel, according to the U.S. Geological Survey.

Back at home, WeatherWatch.co.nz forecaster are picking a low pressure system headed our way has the potential to hang around from the weekend to Wednesday or Thursday next week.
The computer models continue to chop and change precisely where this low will be placed, but the models we trust are showing it stalling around/over the North Island from this Sunday to about next Wednesday or Thursday.

Check out more specifics about your weekend with Philip Duncan’s latest weather video, here, and don’t forget to vote in this week’s poll, below!