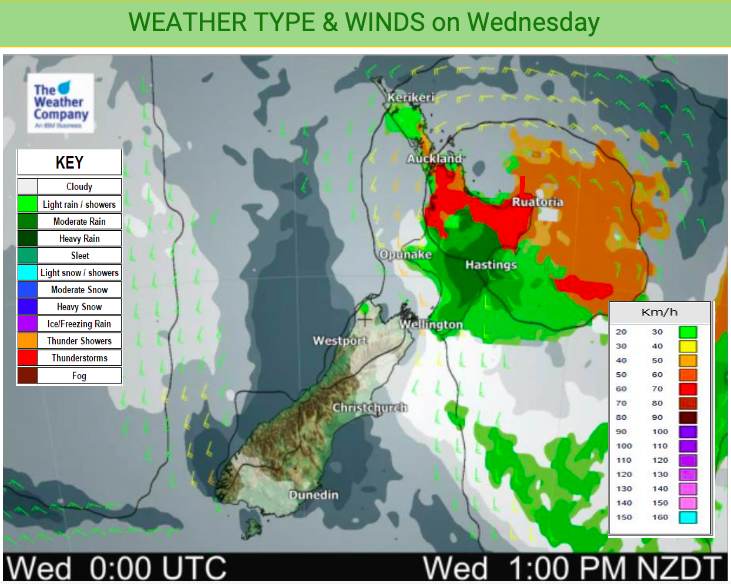 North Islanders have one last day with a low that has been with them since the weekend.

It’s taken 72 hours to track from just west of Auckland to just near East Cape. It will take all of today to just move slightly east of East Cape, but overnight it drifts further east and finally falls apart.

For Wednesday this means more rain in Hawke’s Bay and other eastern areas – and yes more inland downpours and isolated thunderstorms in the afternoon.

For Auckland and Wellington today should see an improvement in conditions, also in Christchurch which will be warmer and sunnier than previous days.

But the eastern North Island and Waikato / Bay of Plenty areas all have the risk of more heavy downpours.

Here are the regional forecasts for Wednesday

Northland, Auckland, Waikato & Bay Of Plenty
Low pressure is still in the area for one more day so winds may vary but generally Sou’West winds and the chance of some downpours in the afternoon, especially in Waikato and Bay of Plenty where thunderstorms are possible. Showers ease and clear at night.
Highs: 16 – 21

Western North Island (including Central North Island)
Mostly dry but afternoon downpours build inland and may have thunderstorms. Showers ease at night. Southerlies for the most part – or light variable winds.
Highs: 13 – 18

Eastern North Island
South to south east winds with more rain or showers. Heaviest rain and downpours will be in the ranges of Hawke’s Bay and Gisborne where in the afternoon isolated thunderstorms are also possible. Downpours do finally ease in the evening – with drier days ahead for Hawke’s Bay/Napier. Refer to your local hourly forecasts for more details – or visit www.RuralWeather.co.nz
Highs: 14 – 18

Wellington
Southerlies continue and there still may be a lingering shower, otherwise dry with finally the sun returning again.
High: 13 or 14

Marlborough & Nelson
A mostly sunny day with light variable winds, May be an afternoon shower about the Nelson Ranges or inland ranges.
Highs: 17 or 18

Canterbury
A mix of sun and cloud with mostly light winds. Coastal areas may have a light sou’easter. Sunnier and milder for Christchurch.
Highs: 14 – 20

West Coast
Mostly sunny and calm, or a light westerly. Great weather for those setting up AgFest in Greymouth.
Highs: 18 – 20

What has happened to the videos?

Hi David
Phil D is taking a break (first time this year) from videos. He returns next Tuesday right up until Christmas.
Cheers
WW