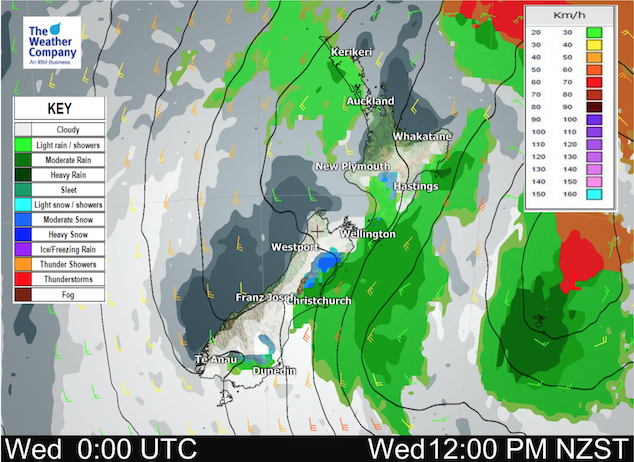 Western North Island (including Central North Island)
Mostly cloudy with the odd shower, small hail possible at times. A few snow flurries down to 500 – 400m. Showers ramp up overnight with slightly heavier falls for a time (especially about the Central Plateau with snow to 500m). Northern Taranaki has longer sunny / dry periods during the day. Cold south to southwesterly winds.
Highs: 6-11

Wellington
Showers, a chance of small hail. Strong southerlies may rise to gale at times later in the day. Evening showers may be heavy, snow flurries to 400m.
Highs: 8

Marlborough & Nelson
Mostly cloudy about southern Marlborough (south of the Wairau Valley), showers at times with a risk of small hail, showers may be heavy at night. Snow to 400m. The rest of Marlborough has a mix of sun and cloud, Nelson has a sunny day. Cold southwesterly winds.
Highs: 8-12