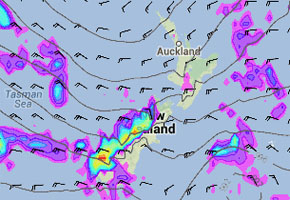 A westerly airflow lies over the country tonight with high pressure to the north of New Zealand and low pressure to the south. Expect wet weather for the west of the South Island, dry out east. In the North only the odd shower affects western parts while in the east conditions are dry.

Central North Island, Waikato, Auckland & Northland
Any remaining showers clear this evening then expect a mix of clear and cloudy spells with westerly breezes. Later in the night a few showers may return south of the Waikato.
Lows tonight: 5-11

Bay Of Plenty
Any remaining showers clear this evening, then expect clear spells with some cloud. West to southwest winds.
Lows tonight: 6-7

Western North Island
Brisk west to northwest winds with cloudy periods and the odd shower at times, mainly about northern Taranaki this evening and then elsewhere later in the night.
Lows tonight: 8-9

Central Otago
Cloudy with northwesterly breezes, a few spots of rain later this evening and a period of rain overnight possible.
Lows tonight: 3-4