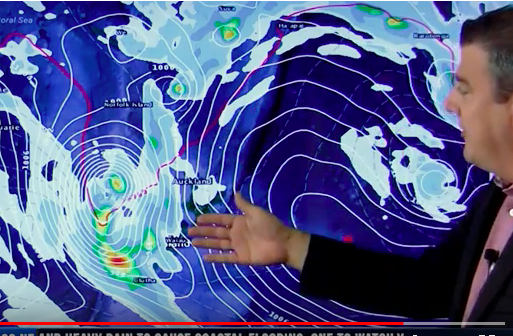 A storm from the tropics is coming our way almost exactly one month after the last one – and it brings similar risks.

From today until the start of next week New Zealand will be mostly settled with inland downpours developing.

By Sunday and the start of next week the temperatures will be ticking up even further with highs in Central Otago pushing into the mid 30s, possibly higher.

But itâ€™s the last day of January and first day or two of February that are most interesting, with a tropical storm expected to drop south and cross over New Zealand at some point. King tides may also combine with strong winds and heavy rain to cause coastal flooding.

At this stage we expect this system to weaken and fall apart in the NZ area so it may not technically be a “storm” by the time it arrives – but it’s certainly one to watch as it does look to be a significant system that could produce damaging weather in some areas.