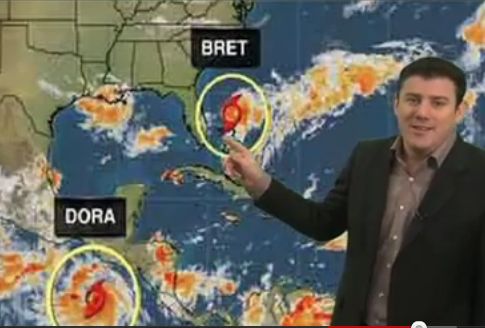 NZHerald.co.nz and WeatherWatch.co.nz bring you the latest on the incoming large low which is already bringing some wind and cloud into northern New Zealand.

Rain warnings have been issued for northern New Zealand and more are possible.

A belt of strong easterlies will move down from northern New Zealand during Thursday with gales in exposed places.  WeatherWatch.co.nz says rain, however, will be the main feature of this low.

The low will battle with a high south of the country until the weekend when a truce is reached and the two systems cross New Zealand moving eastwards.  This will bring a cold southerly change into the South Island on Sunday – snow is possible to low levels so one to watch.

Temperatures across northern New Zealand will remain mild – with overnight lows up several degrees tonight for some northern NZ towns and cities like Auckland and Whangarei.

We also bring you the latest on Typhoon Ma-On moving into Japan today, also Tropical Storm Dora passing near Mexico and Tropical Storm Bret to the east of Florida.