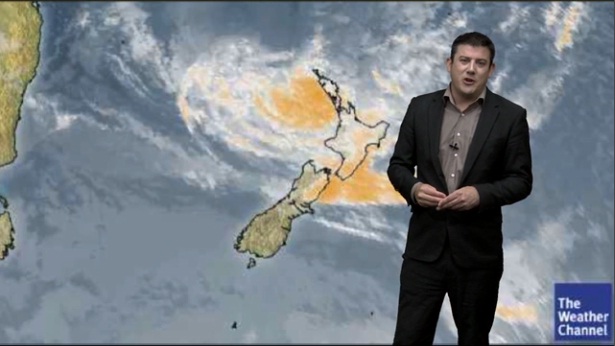 The low is gradually weakening but is already sending rain across the upper North Island.

We have a large calm area in the centre of the low, but around it are gale to severe gales.

These strong winds are expected to move into Auckland and other northern areas during Tuesday as the low heads south and the gale souâ€™westers move in behind it for a time.

The rest of the week looks unsettled, with souâ€™west winds blowing across many areas ahead of a high this coming weekendâ€¦but for Auckland Anniversary Monday there may be some incoming rainclouds once again.

Ummmmmmm . . . Weather Watch . . . what is that ugly looking thing, coming towards us in the very last frame of the Metservice five day Rain Forecast map?

P.S. thank you for the ongoing updates. Much appreciated!

Hi there, we use completely seperate data from MetService so who knows what their models are picking – we don’t monitor them so can’t say if that’s accurate or not for them.  However other models we trust and use do pick a low pressure system around then – one shows a smaller low crossing NZ the other shows a more aggressive low, like the M/S one, dropping south over the lower South Island.  Either way, the unsettled spring pattern continues!

What are the strong winds we are experiencing right now – as your report says no strong winds until tomorrow but it’s blowing a gale out there right now?

Hi there, the winds are expected to increase today from the E or NE but severe gales are not predicted today on land. Pockets of damaging winds are most likely tomorrow, but we’re not surprised to hear some western parts of northern NZ are now starting to get gusty as the centre slowly moves in.