Weather is as weather does 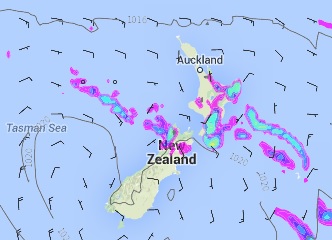 Another week of weather on the way if one hadn’t noticed and what do we have in store? Well read below and we’ll give you a brief outline as to what is up.

Monday has a west to southwesterly airflow over the North Island, areas of cloud and sunny areas. Mainly dry although there could be a light shower in the west mainly morning. Mostly sunny on the east coast with east to northeast breezes.

The South Island has westerly breezes in the west, cloudy areas and the odd shower possible. Mostly sunny in the east with east to northeast winds.

Tuesday is a repeat of Monday for the North Island, mostly sunny over the South Island with westerlies in the west and east to northeast winds in the east. The interesting feature is a front that moves onto the lower South Island late afternoon bringing showers which pushes north later in the evening.

A weak low lies over the North Island on Wednesday, mainly settled weather with southerly quarter winds for the lower half of the Island and sea breezes for the upper half. Isolated showers may develop in the afternoon for some eastern regions.

Showers clear the lower South Island in the morning and push northwards during the day further north, the West Coast is mainly dry although a few isolated showers could develop about the ranges in the afternoon especially Buller.

Thursday has a slack pressure gradient over the country meaning there’s not really a defined high neither is there any defined lows. This can be a situation the leads to instability and convergence zones which may be the case on this day.

Most regions look mostly sunny in the morning, cloud builds for many in the afternoon with isolated showers possible. Showers are looking more likely about inland areas of the upper South Island and for many inland North Island areas where storms could even form.

Finally on Friday, the North Island sits under a weak ridge of high pressure. Sunny areas and some cloud for most with northeasterlies in the east and westerly quarter winds in the west. A few isolated showers may develop in the afternoon for the upper North Island however it’s looking very sparse.

Over the South Island a front works its way north over the Island during the day with showers and a southwest change, expect warm weather and northwesterlies before it moves in.