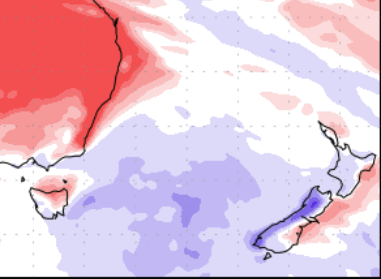 UNSETTLED WEEK ON THE WAY

The week ahead is looking quite unsettled with plenty of frontal activity coming out of the Tasman Sea and pushing into New Zealand from the west. Naturally western regions will get plenty of rain, thunderstorms are likely too and maybe even some hail Thursday on wards, rain may spread into eastern regions at times as fronts move through. Fronts on Friday and Sunday look to be the strongest.

Expect strong north to northwesterly winds ahead of fronts moving over, gales are looking likely through Central New Zealand and Cook Strait especially. Once again Friday and Sunday will have the strongest winds.

The below map (Precipitation percentage of normal) for the next 7 days shows wetter weather in the west (blue) and drier conditions in the east (red). The West Coast picks up the bulk of the rain.

ANY SNOW ON THE HORIZON?

Lets deal with the next 7 days out. Snow to sea level looks to be out. Also, due to the westerly nature of most of these fronts any snow in the east (Canterbury) looks to be out too.

While snow will occur above 1000m this week in the Southern Alps in the west, we’ll deal with possibilities below 1000m.

On Sunday some widespread snow in the Alps (even east of the Divide a bit) moves through down to 600m. On Monday we start to get some cold air and shower activity for the far south (Southland and Otago), snow to 500 or maybe 400m may be possible here, meanwhile some snow in the Alps west of the Main Divide to 600m continues.

Tuesday is similar to Monday however the levels about the far south lift up a little.

The above is based on what weather models are indicating for the week ahead at the moment, some of these details will may change. But we can see that mainly the Southern Alps west of the Main Divide will get snow then the far south early next week perhaps.

The eastern North Island has a very nice afternoon on Wednesday, temperatures may reach into the early twenties.