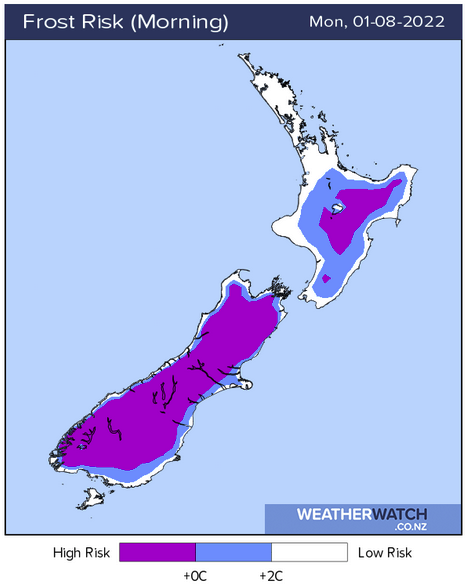 Widespread frosts are likely for the South Island this morning and also many inland parts of the North Island.

NICE DAY IN THE EAST

Eastern regions will likely have a nice day today, a bit of a change from last week. Some high cloud may work into the South Island’s east coast though.

Tuesday on wards sees higher temperatures for eastern regions, in the mid to late teens.

A front moves over the South Island on Tuesday bringing heavy rain to the West Coast as it moves northwards, reaching Buller in the evening, thunderstorms may occur also.

Northwesterly winds will be strong over the South Island and lower North Island, gales are possible in the east for Canterbury / Marlborough and will be very likely through Cook Strait.

For any watches and warnings put out by Metservice, please visit this page here.