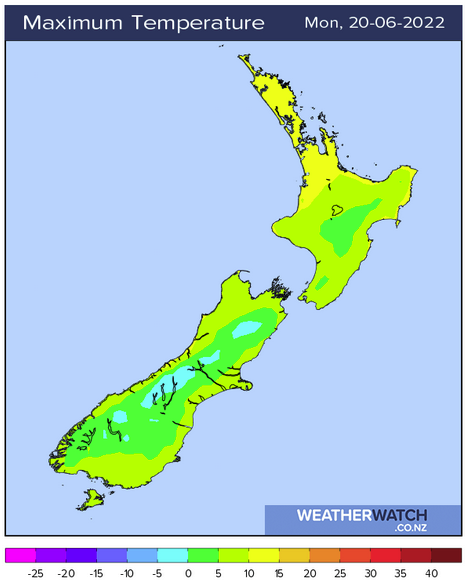 COLD DAY IN THE EAST

A very cold southeasterly airflow lies over New Zealand today bringing showers in the east, light snow flurries to 600m, possibly getting as low as 400m north of Banks Peninsula through to the ranges of Wairarapa.

FROSTY OVERNIGHT FOR THE SOUTH ISLAND

While certain parts of the South Island will be frosty this morning (mainly inland, Central Otago for example), the frost risk spreads for overnight tonight into Tuesday morning with heavy frosts for inland areas.

A high pressure system spreads over the South Island on Tuesday bringing settled, sunny weather. Showers for the eastern North Island, partly cloudy skies out west with showers about Northland.

Thursday is settled and mostly sunny for most, some mid level cloud for the eastern North Island breaks away. Partly cloudy skies north of Auckland, a few showers for Northland. The West Coast has a mix of sun and cloud.