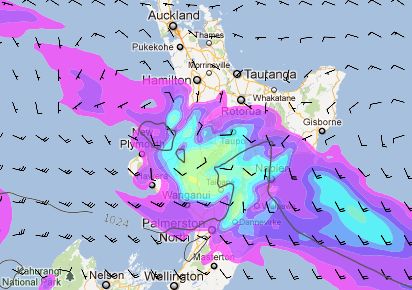 A slow moving front continues it’s slow trek northwards – but it is weakening significantly as it does so reports WeatherWatch.co.nz.

The front, which has dumped heavy rain on the West Coast and has been associated with damaging gales in Southland is quickly running out of puff as it runs into higher air pressure over the North Island.

In its wake is another high, quickly “flattening out” the air pressure behind it, which is causing the winds to ease.

Light or breezy winds will be the order of the day for most places by Friday as the air pressure continues to rise over the country – choking out the life from the front.

But it won’t completely stamp out the rain – leaving showers for Friday and Saturday across western and northern areas of the North Island.