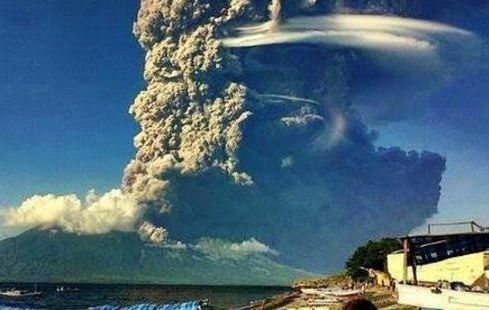 Flights across northern Australia could be affected for days as a vast ash cloud spews from an Indonesian volcano, Deputy Prime Minister Warren Truss says.

Sangeang Api, a volcano off the Indonesian island of Sumbawa, has erupted at least three times since Friday afternoon.

Flights to and from Darwin International Airport have been cancelled on Saturday as the ash cloud spreads across the Top End and towards Alice Springs.

Mr Truss says the ash cloud sits between 6km and 13km in the atmosphere and is sweeping southwest over northern Australia.

“Depending on wind and other weather conditions, the ash has the potential to affect flights to and from other airports, including Brisbane, during coming days. This is currently being fully assessed,” he said.

Airservices Australia, the nation’s air navigation authority, the Civil Aviation Safety Authority and the Bureau of Meteorology are all investigating the cloud, Mr Truss said.

“Depending on wind and other weather conditions, the ash has the potential to affect flights to and from other airports, including Brisbane, during coming days.

This is currently being fully assessed,” he said.

“Passengers are advised to check with their airlines for further information.”

The Civil Aviation Safety Authority says volcanic ash can affect all aircraft with piston or jet engines at all flight levels.

“Commercial air operators and private pilots planning to fly in this area should conduct a safety risk assessment before any flights,” a spokesman said.

“CASA recommends flights are not conducted into areas with visible volcanic ash clouds.”Flights into areas with low levels of ash contamination should only be conducted after a safety risk assessment has been carried out.”

The manager of the Volcanic Ash Advisory Centre at the Bureau of Meteorology in Darwin, Emile Jansons, said the cloud is dispersing as it spreads south but the situation could change at any time.

“There is a very strong jet stream so the boundary (of the cloud) may come further south.”

He said no impact is expected on Brisbane but this could change.

Mr Jansons said volcanic ash can be hazardous to aircraft but the decision whether or not to fly is a safety and economic decision that rests with individual airlines.