VIDEO: Watch as Typhoon Soudelor lifts a plane off the runway 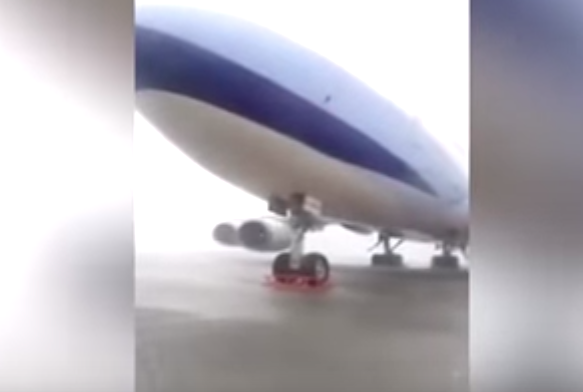 Powerful Typhoon Soudelor has battered Taiwan with strong wind and torrential rain over the weekend, killing six people and cutting power to 3.62million households.
By midday local time, as the eye of the storm passed over the island nation 110 miles east of China, four people were missing and 101 injured, while hundreds of flights had been delayed or cancelled, authorities said. More than 9,900 people have been evacuated.
The storm made landfall early in the morning in the east coast counties of Yilan and Hualien, bringing up to 1,000 mm (39 inches) of rain in mountainous northeastern areas and wind gusting up to 200 kph (124 mph).

Television footage trees uprooted and power poles toppled over, a moped being swept into the air by wind and shipping containers piled on top of each other at a port.

This incredible footage comes through from Chinese YouTube user Dim Sum Lee, showing a stationary passenger jet being lifted off it’s wheels by the sheer strength of the winds – amazing!

– Sent in by: Grayson Ottaway