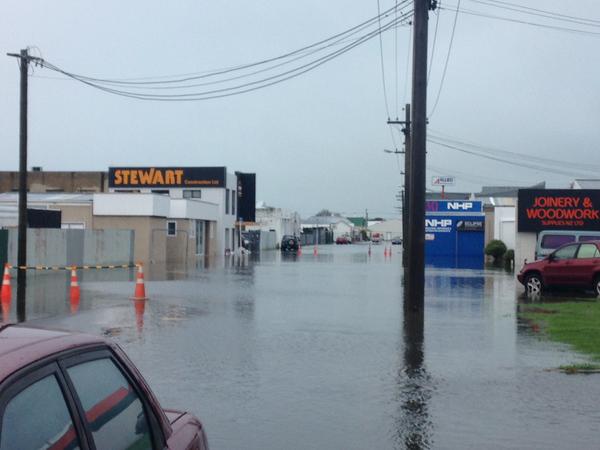 Updated — Dunedin residents are being urged to avoid unnecessary travel, after a night of severe flooding.

Parts of Mosgiel, the Brighton Coast and Taieri Plain have been badly hit, and a number of roads are still closed.

Fire Service shift commander Andrew Norris said the teams attended hundreds of call-outs since 12pm yesterday due to the deluge.

Newstalk ZB’s Adam Walker asserts it’s what people have been predicting for many years.

“With the tides coming in and the low lying areas…this is some of the worst flooding I’ve ever seen in Dunedin.”

“The water was rushing into the corridors and rooms six, seven hours ago . They certainly won’t be wanting to do anything before daylight and I’ll be surprised if it’s dried out enough to put people in.”

Cull adds the flooding has caused huge problems that are still a reality this morning.

“The worst hit areas are the lowest lying so South Dunedin, which is on sea level pretty much, we know that there is a lot of flooding there. That’s where the rest home was evacuated, that’s where the school was sent home early.”

All DCC water supplies are safe to drink. Privately owned water bores should if concerned shut down the bore head and use stored water

The student army and Surf Life Saving Club’s water rescue team also mobilised to battle the water with sandbags through the night, he said.

“Often there was very little we could do, it was just a matter of offering advice and reassurance to people.

“We just can’t pump out city blocks full of water.”

It had been quietening down in the last six hours and people were readying themselves for a day of cleaning up, he said.

Weather Analyst Richard Green confirms the rain event is one for the record books.

“Dunedin hasn’t seen a rainfall total like yesterday since 1923.”

A number of homes and commercial properties have been ruined by knee-high floodwaters.

“They will be checking all the suburbs affected to make sure that homes haven’t been too badly damaged.”

NZME’s Callum Proctor reports many schools are closed for the day or for the morning, and people should stay home if they can.

“Avoid coming into contact with surface water as it may be contaminated by sewage.”

“We’re going to look at where any of the water was potentially contaminated with sewage or other undesirable items and do something about isolating or removing that.”

Low lying parts of South Dunedin remain under water this morning, especially Melbourne Street and those around Hillside road, while crews based out at St Kilda Surf Club have been working through the night sand bagging properties.

There’s also been a number of horrific videos of people returning home to soaked houses and at this stage all kindergartens, primary schools and some high schools will start at 10am.

The heavy rain has eased, but there are multiple road closures and many people have had to evacuate their homes.

The Fire Service could help with some of the effort but there was also a burden on insurance companies to hire contractors to get some of the water out, he said.

“Today will be a major clean up day.

“Most of it should drain away naturally. However there will be a lot of properties that have basements in low-lying area that it will pond in so they will need some sort of assistance in those areas.”