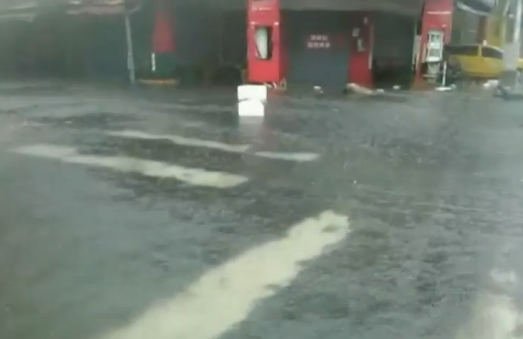 A typhoon that lashed Taiwan dumped heavy rain and winds on the Chinese mainland, leaving a total of 22 people dead or missing, collapsing homes and trees and cutting power to more than a million homes.

Typhoon Soudelor made landfall in China’s Fujian province and was downgraded to a tropical storm as it moved across the region.

Rains from the typhoon triggered mudslides in mountainous Pingyang county in Zhejiang province, north of Fujian, killing eight people and leaving two others missing. One was seriously injured, the county government said.

The Fujian Civil Affairs Department said the storm caused 36 houses to collapse and damaged 281 others. Authorities had evacuated more than 370,000 people and ordered around 32,000 boats back to port before the typhoon struck land.

The state broadcaster showed people wading in knee-deep water in the provincial capital of Fuzhou and said some streets were submerged under 80cm.

In Taiwan, where the typhoon made landfall on Saturday, the National Fire Agency said five people died, five were missing, and a further 185 were injured.

The dead or missing included an 8-year-old girl, her twin sister and their mother who were swept out to sea, a firefighter who was killed while another was injured after being hit by a drunken driver as they attempted to move a fallen tree.

The storm downed trees, traffic lights and power lines on the island, causing more than four million households to lose electricity. More than 500 flights were cancelled or delayed.

In Fujian, strong winds caused power outages to more than 1.41 million households even before the storm made landfall, the official Xinhua News Agency said.

Three airports were closed and more than 530 flights cancelled, while more than 7000 soldiers and police were on standby, provincial authorities said.