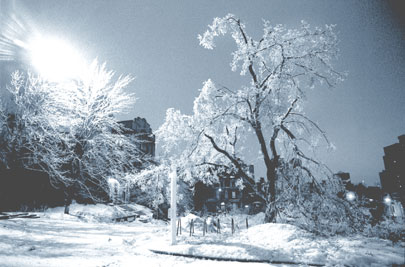 Brampton, Canada — Canada is no stranger to ice storms in winter and early spring, and a small burst of “Freezing Rain” last week created a thick layer of ice across parts of Ontario, the province Toronto is in.

Freezing rain is a little complicated – but basically it’s cold rain, that freezes instantly to surfaces that are super chilled.

Liz Hall works for Air Canada and lives near Pearson International Airport in Toronto – we’ll let her explain what Freezing Rain is:

“Snowflakes fall from the clouds into a layer of warm air and melts into rain drops.
“Then the raindrops fall through a cold air layer near the ground, and it doesn’t freeze thoroughly until it hits something colder than that, such as the trees and the ground, roads and sidewalks.
“Sometimes it’s so thick you can’t even see out of the windows – it can get up to 6 inches thick!

“It’s not usually that bad, but we’ve have a couple of doozies since I’ve lived here in the last 45 years…it’s brutal if you have to chip it off your car windshield.”

The freezing rain – or ‘ice storm’ as it was dubbed afterwards – actually occurred almost a week ago.

“It was Last Wednesday night, as my office was closed the following Thursday morning – and it didn’t warm up enough to melt the ice until Saturday when I took the video” (Easter Sunday NZT).

“The sound in the video is the sound of the ice-covered trees melting, and the ice cracking and falling to the ground. It went on all day!”

“It’s pretty much all melted now, as its 11 degrees today”.

It caused massive damage to trees and electrical infrastructure all over the area, and millions were left in the dark for periods varying from days to weeks, and in some instances, months.

It led to 35 fatalities, a shutdown of activities in large cities like Montreal and Ottawa, and an unprecedented effort in reconstruction of the power grid.