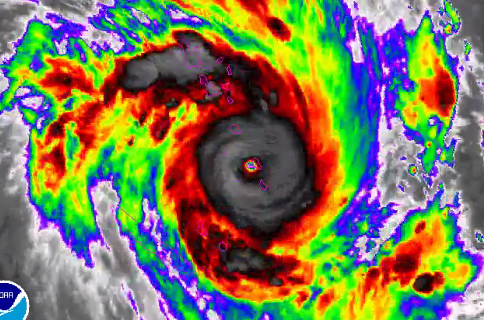 “The leftover water in those creeks is what people are using now. They are basically drinking mud. There’s no more running water.” – Vanuatu government representative Cliff LukeÃ‚ on a NZAF surveillance flyover

Cyclone Pam struck across most of the islands of Vanuatu with winds gusting at up to 320 kilometres per hour. Homes and structures were blown apart. But there was a surprisingly low loss of life.

The people of Vanuatu suffer cyclones so regularly that their local knowledge on how to bunker down and survive is seemingly innate. Their subsistence crops, however, were decimated, with estimations that 90 per cent were lost.

A3: I thought Tanna Island in Vanuatu was more remote than I imaged. This was a typical road on the island. #TRLT pic.twitter.com/mKl5FCvkE0

Buildings, roads, infrastructure are flattened, but the people of Vanuatu are getting on with the job of cleaning up and the long road to recovery.

“A lot of the guys likened it to an artillery impact … most of the trees were cut off at about waist height.” – Townsville’s Third Combat Engineer Regiment (3 CER) commanding officer Lieutenant Colonel John Daunt

On this day (3/13) in 2015, TC Pam devastated Vanuatu, causing over one dozen fatalities and $200 million in damage. pic.twitter.com/oqqvNsHsd0

A report from August 2015 put the financial toll of Cyclone Pam at $590 million, more than half of Vanuatu’s yearly GDP. The figures are similar to the costs being touted now in devastated Fiji nearly a year to the day.

Before the costs were counted though, in the initial days, weeks and months after March 13, assistance from its Pacific military partners and NGOs on the ground sought to re-establish the nation’s basic needs.

As if a near-complete decimation of subsistence crops by the cyclone was not enough, Melanesia came to be caught in the grip of an El Nino-driven drought across Papua New Guinea, Solomon Islands and Vanuatu.

It continues to compound the destruction left behind by Cyclone Pam as water sources dry up, crops fail, and residents continue to survive on food handouts.

One year on, Vanuatu reflects on the most powerful cyclone to ever hit the Pacific https://t.co/1gfVouLdAY pic.twitter.com/7lv5WWPWVd

“Crops were devastated and are yet to fully recover. Here your food garden is your lifeline, so people in Vanuatu are now dealing with an overwhelming double crisis.” – Statement from Charlie Damon, CARE Vanuatu program manager

On the one year anniversary of Cyclone Pam, aid organisations on the ground in Vanuatu continue to roll out drought assistance along with its post-cyclone response, even as other catastrophes strike the region.

As the situation in Fiji and Cyclone Winston becomes clearer, many disaster management organisations are finding its issues are largely tracking along similar lines with those that Vanuatu faced, just one year ago.