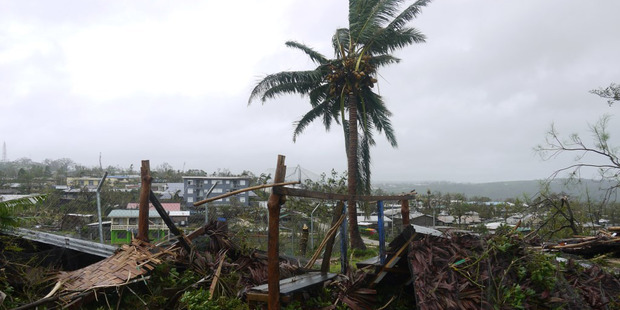 Cyclone-torn Vanuatu is in desperate need of food, clothing, medicine and basic shelter – and a full recovery operation could cost hundreds of millions of dollars, disaster relief organisations say.

The Pacific island nation’s President, Baldwin Lonsdale, has spoken tearfully of “a paradise” lost, needing to rebuild from scratch after winds of up to 320km/h, storm surges and floods smashed the country.

The full scale of the devastation is yet to emerge, but aid agencies are already warning of a dire situation.

He said accurate reports from some of Vanuatu’s remote islands were slow to arrive, and it would take days or weeks to fully assess the catastrophe.

“We’re suspecting tremendous damage but as of yet we really don’t know.”

However, it was clear the Melanesian country of 260,000 needed help with clothing, food, basic shelter, medical supplies, water, and other necessities.

Mr McInnes said there was “no question” the relief effort would cost tens of millions, if not hundreds of millions of dollars.

He said Vanuatu’s farms and food supplies were wrecked, and its ruined housing stock – mostly made of traditional wood and thatch or other vulnerable materials – might have to be rebuilt in much sturdier fashion.

Aid agencies including Save the Children said the death toll of eight was expected to rise and many people lacked goods essential to survival.

About 60,000 children in Vanuatu were thought to have been affected, Unicef executive director Vivien Maidaborn said.

Reports of total devastation were emerging from the southern island of Tanna, she said.

Unicef had spent years developing Tanna’s water, sanitation and hygiene facilities but it seemed Pam obliterated nearly everything in sight. Even concrete buildings on Tanna were flattened.

“There’s no word for it except we’re feeling incredibly distressed,” Ms Maidaborn said.

Aid workers have warned the next few hours and days would be crucial to stopping a greater catastrophe.

“One of the concerns we’ve got is that there have been measles outbreaks as recently as the beginning of March.”

Now, hungry and thirsty babies were at risk of drinking unsanitary water, she said.

The agency also warned of safety threats, as Vanuatu imposed a 6pm to 6am curfew to prevent looting.

Aid groups said although many people instinctively wanted to donate goods or hampers to Vanuatu, it was better to make financial donations to established charities and agencies with experience distributing aid as needed.

Save the Children warned of “door-knocker scams” already emerging in Australia, and advised donors to ask for identification and only donate through major organisations.

The Red Cross said it had more than 200 volunteers “on the ground” in Vanuatu. The organisation said it was giving first aid to injured people, supporting others at evacuation centres, and visiting homes to check on families.

It said it was also distributing food, water and relief items such as soap, kitchen supplies and tarpaulins to people.

He said priority would be given to those with medical conditions, the elderly and those with young children.

Mr Key said the High Commission in Vanuatu was contacting New Zealanders to check on them, and there had been no reports of casualties so far.

The Government has so far given $2.5 million toward the relief effort after Cyclone Pam hit Vanuatu and has sent supplies on the Hercules, which left on Sunday.

The Ministry of Foreign Affairs and Trade was also advising people not to visit Vanuatu unless it was essential.

In a statement on its website, VSA said 19 volunteers in Port Vila and Santo were confirmed safe, but four on the islands of Pentecost, Malekula and Tanna were yet to make contact.

Communications were still down on these islands, a VSA spokesman said.

“All volunteers were in secure accommodation with extra supplies before the cyclone hit and we were in constant communication.”

The spokesman was unable to confirm whether the four people missing were New Zealanders, out of respect for the families involved.