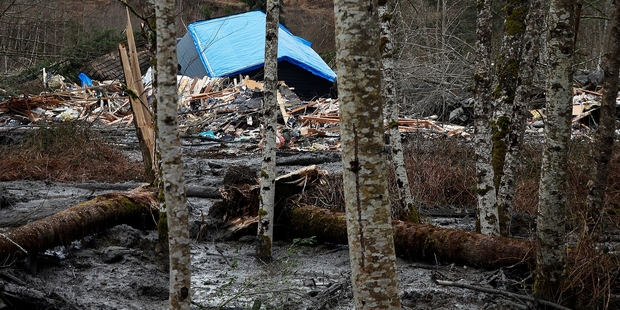 About 18 people are still unaccounted for after a massive mudslide in rural northwest Washington state killed at least three people and forced evacuations because of fears of flooding, authorities said.

Snohomish County Fire District 21 Chief Travis Hots said at a news briefing that “we suspect that people are out there, but it’s far too dangerous to get responders out there on that mudflow.”

Searchers in helicopters will be flying over the area of the 1-square-mile (2.6-square-kilometre) mudslide to find people who may have been able to get out on their own, as well as look for other signs of life.

Authorities are also trying to determine how to get responders on the ground safely, Hots said, describing mudflow as “like quicksand.”

Officials described the deadly slide as “a big wall of mud and debris” that blocked about one mile (1.6 kilometres) of State Route 530 near the town of Oso, about 55 miles (90 kilometres) north of Seattle.

It was reported about 60 feet (18 metres) deep in some areas.

Several people including an infant were critically injured and as many as 30 houses were destroyed. The slide wiped out one neighborhood, where there were about 28 to 30 homes, authorities said.

Hots said the number of missing is fluid and could change because some people may have been in cars and on roads when the slide hit just before 11 a.m. Saturday.

The mud was so thick and deep that searchers turned back late Saturday after attempting to reach an area where voices were heard crying for help.

Rescuers couldn’t hear any signs of life once they got closer, and the decision was made to back out due to safety reasons, Hots said.

The slide blocked the North Fork of the Stillaguamish River, which prompted an evacuation notice because water was rising rapidly behind the debris. Authorities worried about severe downstream flooding if water suddenly broke through the debris.

Authorities said on Sunday that residents could return home during daylight hours.

The Snohomish County sheriff’s office reported that two people had been killed at the scene. Authorities later said one of the people who had been rescued died at a hospital.

A 6-month-old boy and an 81-year-old man remained in critical condition Sunday morning at Harborview Medical Center in Seattle. Hospital spokeswoman Susan Gregg said two men, ages 37 and 58, were in serious condition, while a 25-year-old woman was upgraded to satisfactory condition.

Five of the injured were taken to Cascade Valley Hospital in Arlington, and one has been treated and released, hospital spokeswoman Jennifer Egger said She didn’t know the condition of the others.

The American Red Cross set up at the hospital, and evacuation shelters were created at Post Middle School in Arlington and the Darrington Community Center.

One eyewitness told the Daily Herald that he was driving on the roadway and had to quickly brake to avoid the mudslide.

“I just saw the darkness coming across the road. Everything was gone in three seconds,” Paulo Falcao told the newspaper.

Search-and-rescue help came from around the region, plus the Washington State Patrol and the Army Corps of Engineers. More than 100 rescuers were at the scene.

Authorities believe the slide was caused by ground water saturation from recent heavy rainfall. John Pennington from the Snohomish County Department of Emergency Management said the area has a history of unstable land. He said a slide also happened there in 2006.

“This slide came out of nowhere,” he said.