USA – ‘Warmest Christmas on record’ in store for many 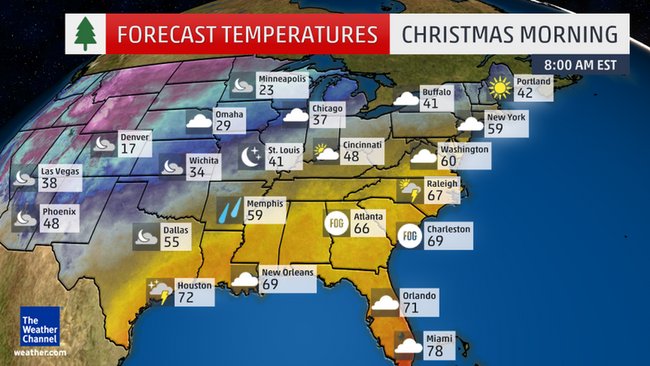 Record-breaking warmth will grip much of the central and eastern states through Christmas Day and into this weekend, continuing what has already been a very mild month in those regions. Several cities in the East will likely see their warmest Christmas Eve or Christmas Day on record, adding to the more than 2,600 daily record high temperatures that have been tied or broken across the Lower 48 in the first 21 days of the month.

This mild forecast means the prospect for a white Christmas is highly unlikely for many east of the Rockies.

Meteorologists sometimes jokingly refer to the type of warm weather pattern we have seen recently, and the one this week, as a “blowtorch” in social media. The term may be a reference to weather maps showing temperatures compared to normal; these patterns tend to resemble a large red or white scorch mark surrounded by shades of orange and yellow, as if a giant blowtorch had been pointed at the Earth.

Of course, the actual cause is not a blowtorch but a weather pattern that keeps typical winter chill at bay and holds air from the Pacific or the tropics over the mainland United States.

Below we have a look at the forecast, followed by perspective on how warm this December has been so far.

Warmer-than-average temperatures have already returned to parts of the Midwest, South and East to start this week.

Though the intensity of the above-average warmth may fluctuate in some locations, parts of the central and especially the eastern states will see temperatures 10 to 30 degrees above average through the weekend.

But this won’t be a sunny, clear-sky type of mild weather pattern in many areas. A southerly flow of moisture from the Gulf of Mexico combined with a stalling frontal system will bring periods of low clouds and rain, leading to some travel hassles at airports and on the roads.

However, the cloud cover will also result in unbelievably balmy nighttime temperatures for Christmas carolers, partygoers and last-minute shoppers. Low temperatures could stay 15 to 35 degrees above average in some areas through Christmas morning and beyond in parts of the Midwest, South and Northeast.

Dew point values will rise into the 50s and 60s for much of the East this week, which will make it feel more humid as well.

Numerous cities will also break with daily record high temperatures through this weekend. This could be the warmest Christmas Eve or Christmas Day on record for several cities in the East.