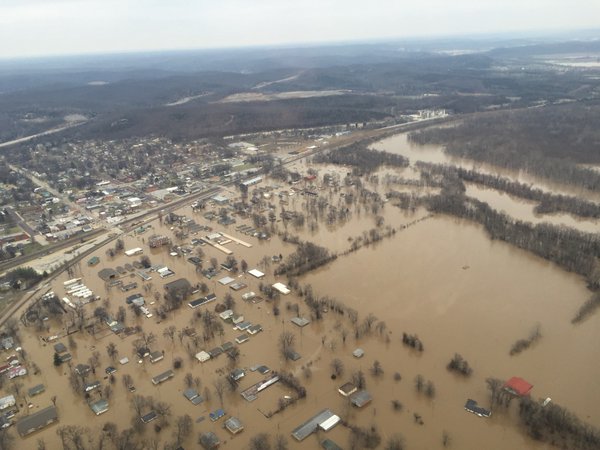 Intense flooding has killed at least 20 people and forced hundreds of roads to close across Missouri and Illinois. Rain-swollen rivers will set records in the Mississippi River basin through much of January.

Flooding on the middle and lower portion of the Mississippi River and some of its tributaries may reach levels not seen during the winter months since records began during the middle 1800s.

In addition to the Mississippi, flooding is occurring or is forecast along the Ohio, Illinois, Missouri, Arkansas, Meramec, Red and other rivers.
Water levels on the Mississippi could rival the mark set during the summer of 1993 and spring of 1995 and 2011 in some cases.
The 1993 flooding was one of the “most damaging natural disasters to ever hit the United States,” according to NOAA. The catastrophic flooding resulted in 50 deaths and damages totaling $15 billion. Thousands were forced to flee their homes, with many unable to return for months.

“All of us remember the devastating impact of the Great Flood of 1993, and that’s why we have been working proactively with our local and federal partners to prepare and respond,” Missouri Gov. Jay Nixon said.
Record high flood levels were reached along portions of the Meramec River at Eureka, Valley Park and Arnold, Missouri, during Wednesday.
The record of 45.91 feet at Thebes, Illinois, will be topped on Thursday evening.
Cape Girardeau, Missouri, could experience record high Mississippi River levels this weekend.
Many communities along the middle and lower Mississippi valley will be dealing with long-duration high water lasting days and in some cases weeks.
Periods of below-freezing air will cause some flooded areas to turn icy and will add to the challenges.