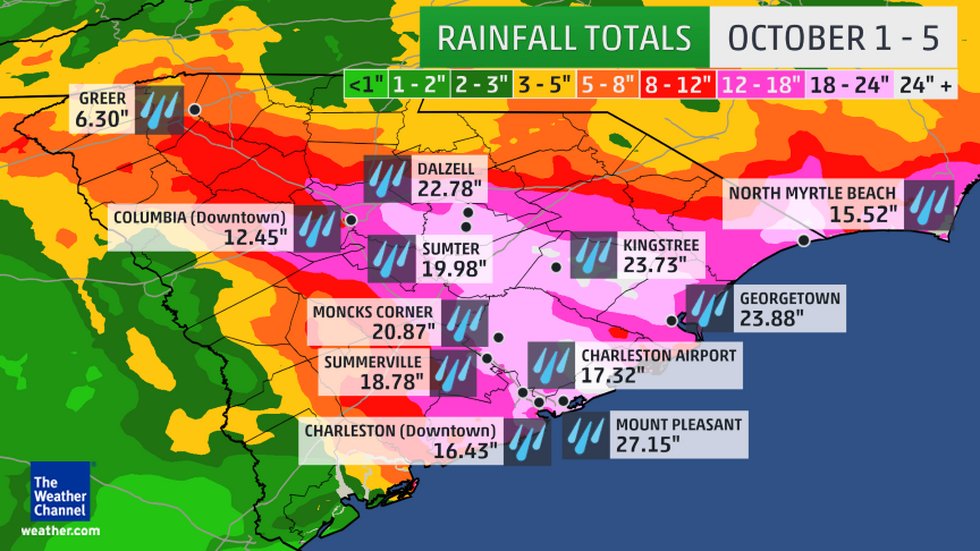 Residents in South Carolina’s Lowcountry were being warned that water from days of flooding across the state was moving in their direction, and it was going to have major impacts.

Near the coast, residents were seen sandbagging around homes, businesses and tourist attractions as they prepared for the surge of water that was headed their way. Though some areas have already dealt with flooding from the initial event, authorities said some areas that didn’t see flooding may get swamped before all that water moves out to sea.

“We are going to be extremely careful. We are watching this minute by minute,” said Gov. Nikki Haley.

Although the bulk of the rain has ended, high waters are still a very dangerous reality after the historic flood event in South Carolina. Rescue crews went door to door in South Carolina’s capital city of Columbia as officials continued to free residents that were trapped by severe flooding that swamped virtually the entire state.

“I believe that things will get worse before they get better,” Columbia Mayor Steve Benjamin said Monday. “Eventually the floods will abate, but then we have to access the damage, and I anticipate that damage will probably be in the billions of dollars, and we’re going to have to work to rebuild. Some peoples’ lives as they know them will never be the same.”

Wednesday morning, Williamsburg County officials were asking some residents south of the Black and Santee rivers to evacuate as the two waterways overflowed their banks. Officials expected to see river flooding in the area, and they’re hopeful that some controlled dam releases will alleviate the flooding, Live 5 News reported.

Dam failures were a constant concern for thousands of residents, days after the rain ended. Residents near one Columbia, South Carolina, dam were told to flee Wednesday morning, as it was believed to be near its breaking point, potentially putting thousands in the path of millions of gallons of water.

Those new evacuation orders were issued after concern that the Beaver Dam at Pebble Creek could breach. All residents were ordered to evacuate the area, asking that they go to A.C. Flora High School.

According to the Richland County Sheriff’s Department, the dam was stabilized at about 8:30 a.m. local time Wednesday morning. Authorities kept a voluntary evacuation notice in effect for residents living downstream of the dam.

During a Wednesday afternoon press conference, Gov. Haley said the state is monitoring 62 of South Carolina’s thousands of dams. Thirteen dams have failed, she also said.

At least 15 people have died from the floods in South Carolina since the rain began to fall days ago. In the wake of the disastrous flooding event, President Barack Obama signed a disaster declaration for the state of South Carolina, ordering federal aid to supplement state, tribal and local recovery efforts.

The rain event has set records all over the state, flooding entire towns. For some locations, this historic rainfall qualifies as a 1,000-year rain event, meaning in a given year there is a 1 in 1,000 chance of observing rainfall totals of this magnitude.

“The flooding is unprecedented and historical,” said Dr. Marshall Shepherd, a meteorologist and director of the atmospheric sciences program at the University of Georgia, in an email to The Associated Press.

This piece of news alert  in relation to  historic  floods  in Carolina, US , in  the first week of  October  2015  was  circulated  about  8  days back  by this Vedic astrology writer  though the  prediction   of  this writer    was in existence  since June last:- October 2015 has just begun. News reports suggest that a powerful hurricane Joaquin is wanting to lash US  coastal areas. It seems concerned officials in US have   advised  residents in places likely to be affected  to be in preparedness. In this regard , this Vedic astrology writer wants to agree with the concerned officials while emphasizing that astrologically speaking, it is advisable to be fully prepared to face the hurricane Joaquin in coming days in US coastal areas or nearby States which  usually has an impact. This writer’s prediction about danger from strong storms  or sea tsunamis  in vulnerable areas near some islands located near sea  to come  in  October 2015 was  published in  article – Total lunar eclipse of 28 September 2015 and world – in  the Summer 2015 ( June) issue of The Astrologer’s Notebook , a quarterly publication from North Port , Florida. Just reproducing the related parts from the article : -“During second half of 2015 , among other things , dangers from sea or in sea like strong storms or sea tsunamis could be likely in vulnerable regions. Power dams and electricity could bring to surface substantial concern. Natural calamities such as floods , landslides and earthquake could sadden.” The prediction further goes in the same article : “  Some islands located near the sea may need  to  take some precaution .Though second half of 2015 seems to be causing concern , months October and November of 2015 are likely to trigger many unwelcome things out of above mentioned aspects or areas of life”.

The unique contribution by way of appropriate , accurate and well- timed contribution of this writer in alerting the concerned people deserves to be noted.