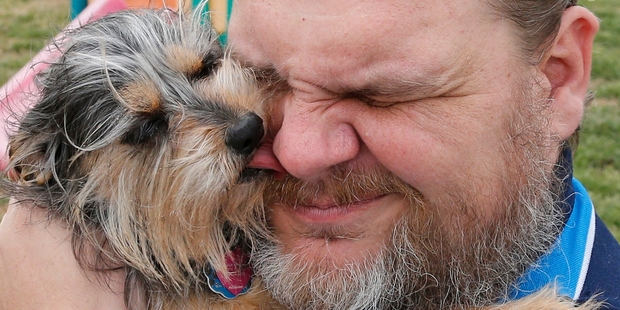 Jerry Starr thought he was taking the safe approach when a twister was reported heading towards his suburban neighbourhood outside Oklahoma City last May.

He grabbed his teenage daughter Dyonna, and his dog Tobi, and drove to the local Del City Hall, which is a public storm shelter.

But when he arrived a police officer told him the only way they could come in was if Tobi, his shih tzu-yorkie mix, stayed outside. No pets allowed. So Starr and Tobi rode out the storm in his car.

“I love her and there’s no way I was going to live knowing I was abandoning her,” said Starr.

But as the spring storm season arrives in Tornado Alley, emergency officials are still wrestling with a dilemma posed by pets.

Since many public shelters won’t accept animals, people wind up dashing across town to rescue their pets or stay in unprotected houses rather than hunker down in safety.

“Pets and sheltering is always a problem,” said David Grizzle, emergency management co-ordinator for the college town of Norman, which closed its public shelters last autumn because of problems with pets and overcrowding.

“Pets come in and sometimes they’re hard to control,” he said, describing past scenes of dozens of frantic dogs along with snakes, chickens and iguanas taken inside.

Access to shelters has got special attention in Oklahoma this year after 79 tornadoes strafed the state in 2013, the second-highest total in the nation, killing 34 people and injuring hundreds. Most of the victims were in cars, houses or unreinforced buildings. A joint state-federal programme offered up to a US$2000 ($2300) rebate to help eligible homeowners install fortified “safe rooms” or above or underground shelters.

“One of the most common injuries that people may sustain during tornadoes, storms or straight-line winds are injuries from falling or flying debris, so it’s important to take shelter,” said Keli Cain, spokeswoman for the Oklahoma Department of Emergency Management.

But while the number of in-home shelters is growing, most people in small towns and of modest incomes depend on sturdy public buildings like schools, hospitals and courthouses. And more than 60 per cent of households have pets.

“People are so attached to their pets, I don’t think it’s even possible to ban them,” said Byron Boshell, director of Security at Oklahoma City’s Integris Baptist Medical Centre, where people from surrounding neighbourhoods come when funnel clouds approach.

Staff members try to herd the pets to the basement garage, away from the patients. But at some shelters, 60 to 70 dogs may be packed in with the people.

Southwestern Oklahoma State University, in Weatherford, used to allow pets into the campus buildings until several bad scenes involving dozens of barking, lunging dogs and other panicked animals. The animals “were kind of terrified from the storm and also strange people”, said Rick Bolar, chief of campus police.

One of the final straws in Norman’s decision to close its shelters came when one family was asked to put its dogs outside to make room for another family that had arrived.

“The adults actually got into fights over that decision and trying to boil down the priority of who should be inside a facility during a storm: a pet or a person …” Grizzle said.

But holding to the no-pets policy isn’t easy because of the chilling consequence rebuffed people sitting outside in their flimsy cars as the twisters move in.

When a tornado approached the community of Tuttle last May 31, Suzanne Brown, 48, rushed to shelter at the local city hall, which was equipped to accommodate 1000 people. She managed to sneak in her cat but not her pomeranian, so she remained outside as the storm came through. She was unharmed, but eight people in nearby El Reno died.

“My dog is like my child,” she said. “I know some people don’t understand that.”

The National Weather Service recognised the pet predicament in a report on last May’s tornadoes in Oklahoma. The report recommended that local emergency managers get the word out on how to shelter pets during severe weather but didn’t have any options to suggest.

Emergency officials say that at the very least, pet owners should think ahead about where they’ll go. Brown said she was already thinking. “We understand that when we have to go, they get into a crate,” Brown said.