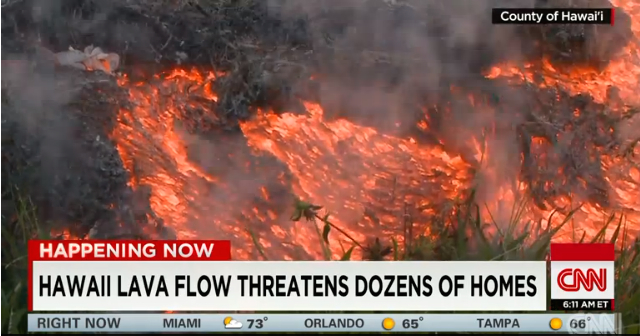 With a mixture of resignation and dread, residents here are watching this gray and orange advance, this 2,000-degree river of molten rock.

Each passing hour, lava from Kilauea Volcano is inching closer to their homes in Pahoa on Hawaii’s Big Island.

The dark ooze has swallowed up fences, flowed over a cemetery and neared major roads. In some places, in this community of about 950 residents, it’s chest high.

“Everybody, including myself, is quite nervous,” Rod Macland told CNN affiliate KITV-TV. “We don’t know. We can’t see the future. The flow does what the flow does.”

By early Tuesday, the lava was about 70 yards from the closest home and moving in a northeast direction. It was flowing 8 to 11 yards per hour, the Hawaiian Volcano Observatory said.

Hawaii officials haven’t issued a mandatory evacuation yet. But many residents have already chosen to leave on their own.

“Most people have vacated,” Hawaii County civil defense worker Franchesca Martin-Howe told CNN affiliate KHON-TV. “They have moved out of their homes. There’s only a few people left.”

The lava flow is expected to displace 900 schoolchildren in the area. Residents who don’t expect their homes to be destroyed worry about being cut off.

“A lot of us are loading up on gas, getting generators in case the energy goes out,” Mike Hale told CNN. “And we’re checking to make sure the Internet stays up.”

“If for some reason someone can’t get to our clinic, we will be there with the mobile unit,” said Harold Wallace, CEO of Bay Clinic. “There’s going to be people who need prescriptions and more.”

The smoke is a problem for residents, especially those with respiratory conditions.

“It’s burning through thick brush, fern,” Tim Orr, a U.S. Geological Survey geologist, told CNN affiliate KHNL-TV. “A lot of smoke (is) coming off the front, a lot of cracking noises, methane explosions are going on. So it’s a noisy situation out there just from all the burning vegetation.”

Some evacuated homes are being targeted by looters, a business owner said.

“Crime is starting to pick up because a lot of people abandoned their houses. Two of my brother-in-laws’ houses got ripped off,” said Matt Purvis, owner of the Tin Shack Bakery, on Monday.

But the Hawaii County Civil Defense Agency said it has received no reports of looting at evacuated houses or businesses.

Rolling with the punches

“As it gets closer, the key is communication with the community, keeping people informed and everybody continue to work around the clock really hard just to minimize as much as possible the impact on the people of Pahoa,” he told KHNL.

But many residents are rolling with the punches.

The lava flow is not exactly a surprise, since it started June 27 and has advanced about 13 miles since then. Kilauea is one of the world’s most active volcanoes.

“I think it’s going to be a little intense at first, a little crazy,” resident Geri Tolchin told KITV. “I think people will adjust. Everybody knows what’s happening.”

“Everybody would wish this lava flow to stop,” he told KITV, “but it’s not going to happen,”