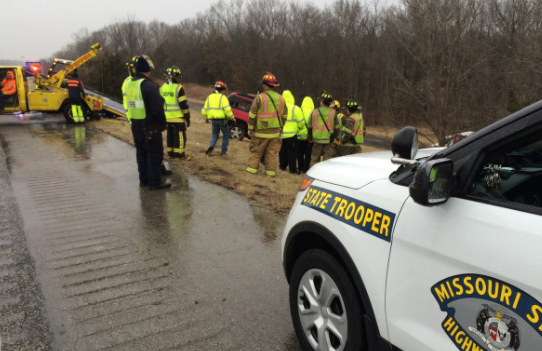 A long-duration ice storm in the Great Plains and Midwest claimed the lives of six people, caused treacherous travel, prompted the delay of an NFL football game and left thousands without power.
Freezing rain, ice and winter storm warnings were in effect from the Texas panhandle north into Iowa and east through central Indiana.

Just West of Kearney on I-80 about an hour ago.

Multiple crashes occurred due to drivers losing control of their vehicles on the ice-covered roadways, including at least four fatalities, according to Missouri and Oklahoma State Highway Patrol. Two fatal accidents also occurred in Kansas on Saturday, the Kansas Highway Patrol reported.
Missouri and Oklahoma declared states of emergency.
The same storm also produced some severe weather in parts of Oklahoma and Texas on Sunday.

At least 30 homes were damaged around the Frisco, Texas, area but no injuries were reported, according to the Associated Press.
A tornado was confirmed near Grand Prairie airport, about 15 minutes east of Arlington, the National Weather Service in Fort Worth said. Fans who attended the NFL playoff game between the Green Bay Packers and Dallas Cowboys at AT&T stadium were forced to remain in the stadium until the threat for severe weather subsided.

Troopers are investigating a weather-related fatal crash on NB I-55 south of Chrystal City. pic.twitter.com/E4TKyBen37