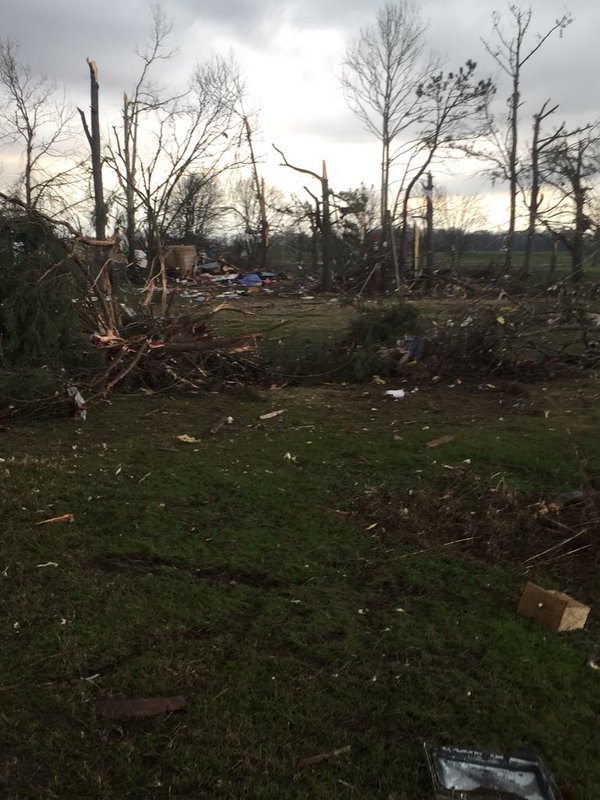 The calendar says it’s nearly Christmas, but the damage looks more like spring.

A powerful storm system roared across parts of the South, claiming 10 lives in Mississippi, Tennessee and Arkansas and injuring scores more.

The Storm Prediction Center said at least 14 tornadoes hit Mississippi on Wednesday, but a single twister did most of the damage.

It started in northern Mississippi and didn’t lift up until western Tennessee. The National Weather Service said it may have been on the ground 150 miles.

“If it is continuous it would be the longest track (December) tornado on record here in the mid-South,” the Memphis office of the weather service said.

The storm managed to take a swipe at a number of small communities in northern Mississippi.

The twister caught Lance Meeks by surprise when he stepped outside his door near Holly Springs.

“I laid down on the ground, and here come the tornado,” Meeks told CNN affiliate WTVA-TV. “Rolled right over me. Uprooted trees, cut trees in half. And I don’t know why I’m still standing here talking to you.”

Early Thursday, the death toll in Mississippi was four, but the numbers could go higher.

A 7-year-old boy died in Marshall County, Coroner James Anderson said. The boy was in a car with his family near Holly Springs when a tornado came through the area.

Three people died in Benton County, authorities said. Two were unaccounted for, according to Master Sgt. Ray Hall with the Mississippi Highway Patrol.

At least 40 people across six Mississippi counties were injured in the storms, said Greg Flynn with the Mississippi Emergency Management Agency. The driver of a tractor-trailer received minor injuries when the storm blew his rig over.

Mississippi Gov. Phil Bryant declared a state of emergency in the aftermath of the storms.

Clarksdale, MS fire chief sent me these pictures of a subdivision wiped out. At least 25 homes severely damaged pic.twitter.com/bQBkGceUd0

The storm made its way to Perry County, Tennessee, southwest of Nashville, where it killed two people. Another person was killed in Rhea County.

An 18-year-old woman was killed Wednesday morning when a tree fell through the roof of her house in Atkins, Arkansas. Four other people in the house, including an 18-month-old, survived. The baby was hospitalized.