US – The science behind the Oklahoma tornadoes 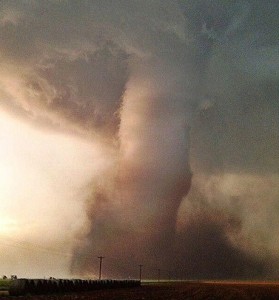 Tornadoes have been in the news for much of the last week but how can they be so damaging and what is the lead up?

Packing winds of up to 320km, the killer tornado that laid waste to Oklahoma on Monday grasped at the deadliest end of what is termed the Enhanced Fujita (EF) scale.

The twister has been categorised as an EF4 tornado – the second strongest on the scale – and capable of pushing over airplanes, trains and trucks, hurling cars large distances and reducing strongly-built homes to piles of debris.

Only well-constructed storm shelters could afford protection from the ferocious power of these monsters – none of which have ever been or are ever likely to be seen in New Zealand.

The tornado stood among the deadliest-ever products of the unique meteorological profile of the United States’ “Tornado Alley”, spanning southward from South Dakota to Texas.

During thunderstorms, tornadoes were sparked as the rising warm air became blocked by colder air above, trapping it and causing it swirl between two air masses.

When the warm wind finally broke through to the cooler layer, the cold air sank and sent the warmer air spiralling skyward, rotating faster and sucking into the tornado’s base more air – and everything around it.

“You get air that starts rushing in towards it, but it can’t get into the centre of the tornado to fill it, because right around the the air is rushing around it,” Dr Turner said.

“So instead, it has to turn and go around the core – it’s almost like a giant upside down model of water going out of a bathtub.”

In violent super-cell storms, air could be travelling upward at rates of 240km/h.

“It’s really incredible. I don’t think any aircraft could climb as fast as that.”

The tornado that killed and injured dozens of people in Oklahoma left a path more than 30km long and 1km wide in places, with winds that reached 321km/h.

Its force was enough to flatten entire neighbourhoods.

By contrast, typical New Zealand tornadoes ranged in wind speed between 115km/h and 180km/h, lasted for a few minutes and were highly localised, tracking across land for just few kilometres over a path of tens of metres wide.

New Zealand’s other most lethal tornado struck at Frankton, Hamilton, in 1948, carving a 100-200 m swath through the suburb, causing three deaths and ranked as an EF2 twister with winds between 150km/h and 200km/h.

“In New Zealand, because we are more of a maritime country, the heating of the lower surface isn’t as strong and the cooler air aloft isn’t quite as cold, so there isn’t quite as much energy for making a really strong updraft,” Dr Turner said.

“But you still wouldn’t want to be caught in the updraft of a large thunderstorm in New Zealand – they are violent and strong enough as it is.”