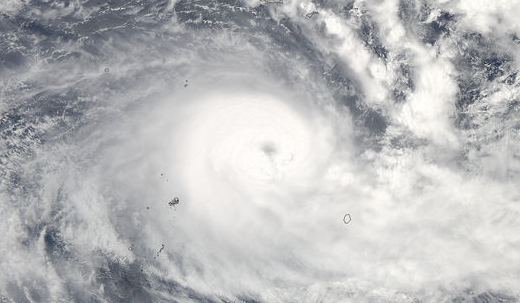 Villagers in northern Tongan islands are hunkering down in churches and hoteliers are boarding up buildings as Cyclone Winston threatens to pack winds of up to 250km/h in a few hours’ time.

Winston is expected to lie 120km north of Vava’u at 1pm today, the latest advisory from the Fua’amotu Tropical Cyclone Warning Centre says.

There will be average winds of 175km/h and gusts of up to 250km/h near the strengthening cyclone’s centre, the latest forecast says.

On top of damaging winds Tongans are also being told to brace for heavy, damaging ocean swells and flash flooding.

Category 4 #TCWinston to pass over #Tonga today, winds up to 175 km/h pic.twitter.com/IMclwAWU4j

New Zealand woman Hilary Murray, currently acting as a caretaker for a resort, said villagers had already shifted into sturdy church buildings ahead of the storm’s fury.

Fears were also held about the damage the rough sea could cause at high tide at 5pm. She said in the absence of sandbags, towels were being used to try to prevent any water damage to the resort – its front deck just 6m from the high tide mark.

She and husband Jason Ball had moved all furniture to the back of every single building on the ocean-front resort.

They had also braced doors at the top and bottom to try to prevent them from flying open when the strong winds passed through the already battered island group.

A representative from New Zealand Red Cross was today flying to Tonga with relief workers and supplies on standby.

Aid agency Caritas said crucial supplies were now being moved into areas expected to be worst affected by today’s cyclone.

Spokesman Mark Mitchell said due to the current El Nino weather pattern and in response to earlier devastating cyclones the northern island group of Vava’u were more prepared than ever as they faced damaging winds for the second time in as many days.

Caritas had already pre-positioned a large quantity of emergency supplies in Tonga and was ready to respond with staff if needed.

New Zealand MetService said over the next 24 hours the winds near the centre of the cyclone were expected to continue to intensify.

In its latest blog, forecasters said Winston was expected to track over the southern Fijian island of Lakeba and then veer towards Kadavu.

The effects of the cyclone were also expected to be felt on Fiji’s main island, Viti Levu.