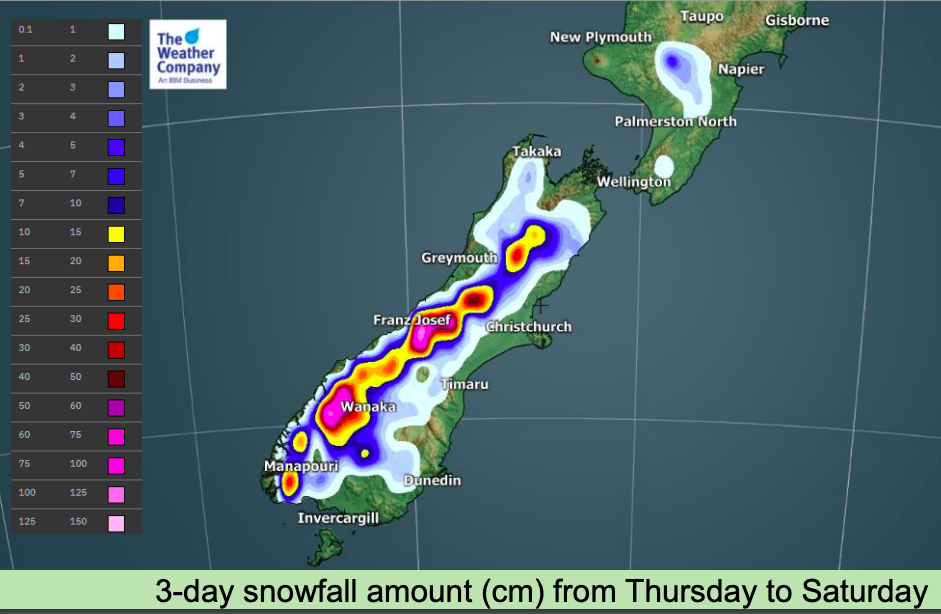 WeatherWatch.co.nz says Wednesday will be peak cold for the nation this week but Friday/Saturday will see another wintry surge in Southland and the lower South Island.

GALES
Gales on Wednesday will mainly impact the western North Island and Auckland with gusts 70 to 100km/h and some isolated locations in the west (like the Manukau Heads and Kaipara Harbour) may see gusts between 110 and 140m/h for a time on Tuesday afternoon.

Gales on Friday are further down the country, mostly impacting Central NZ (upper South Island and lower North Island). These winds may be stronger than Wednesday’s as they get funnelled through Cook Strait area. Gusts on the tops of the ranges may exceed 160km/h with 130km/h gusts lower down.

RAIN:
The main cold front moves over NZ today bringing rain, then more surges of wet weather move in over the days ahead. The bulk of the heavy rain will be on the West Coast while eastern areas look drier.

SNOW:
Heavy West Coast rain will turn to heavy snow in the mountains with over 1 metre likely to accumulate on the summits over the coming five days.

A few snow flurries – lighter and unlikely to settle – will be expected to low levels in Southland and Otago on Wednesday.

FULL DETAILS:
A low and associated cold front pass over New Zealand from Tuesday to Wednesday to produce rain or snow and strong winds across much of New Zealand