Unsettled Easter: Some high pressure to limit northern severity but still a serious low to monitor 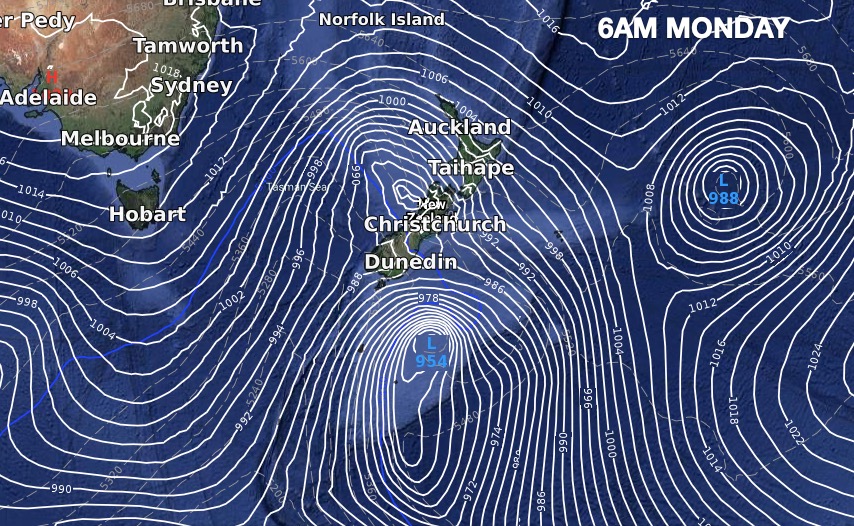 A deep low in the Southern Ocean (with similar air pressure to Cyclone Harold right now) will be tracking past New Zealand this Easter Weekend and for some regions it will be much windy, cooler and wetter than previous weeks.

As we said last Friday we’d need a few days into early this week to fine tune the set up. Here’s what has changed in the computer modelling since we updated on Friday:

Best Weather…
As we said in our updates last week, the angle of the winds for this event plus New Zealand’s mountains and ranges means some regions will have plenty of sun, added warmth and may not always been windy.

Good Friday may have some pleasant weather around the country, then as the winds crank up over Saturday, Sunday and Monday some eastern areas may be quite sunny.

Northern NZ looks unlikely to see much of a temperature drop from this event.

Sunniest and driest weather will be in the east and north east of both islands.

Worst Weather…
We see the weather going downhill over Wednesday and Thursday, then looks to be a pause on Good Friday thanks to some Tasman Sea high pressure, before the main event starts to build Saturday then peaks across Sunday and Monday as a burst of wind, rain, and South Island snow in the mountains and ranges.

Windiest weather will be nationwide by Sunday and Monday but the usual areas will be most exposed, ie: Cook Strait, the Southern Alps, the lower South Island and possibly Auckland (due to the sou’west wind tunnel).

Coldest weather will be in the lower South Island with a brief taste on Thursday then the main cold air surges up this weekend and peaks over Sunday and Monday with wintry conditions for a time in some places.

Snow is not forecast by WeatherWatch.co.nz in any main centres.

Wettest weather will be on the West Coast.

AIR PRESSURE:
While the air pressure compared to Severe Cyclone Harold near Vanuatu today may be similar to the low pressure forming in the Southern Ocean over Eastern Weekend there is an enormous difference. “Tropical cyclones see all that low energy explicitly at the very centre of the storm. But cold Southern Ocean storms can see that low energy spread over a distance of thousands of kilometres. The spreading of all that energy also removes some of the peak wind speeds, so there are positives with more people being affected. A tropical cyclone covers less distance but has much more devastating weather near the centre.

The timing and shape of this event may still change a little further, we will be locking more details in by Wednesday.