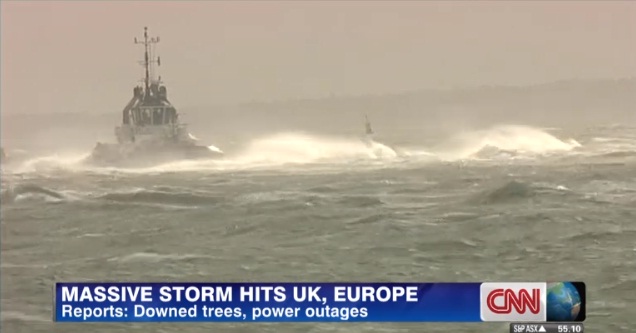 Southern Britain is getting hammered by a major Atlantic storm, which could be its worst in years, and the search for a missing teenager swept out to sea ended for the night with no sign of the boy.

The unidentified teenager disappeared from Newhaven, East Sussex, on the southern coast, according to the Royal National Lifeboat Institution.

“This weather system is typical of what we expect to see in winter, but as it’s coming in during autumn — when trees are in leaf — and while the ground is fairly saturated, it does pose some risks. We could see some uprooted trees or other damage from the winds, and there’s a chance of some surface water flooding from the rainfall — all of which could lead to some disruption,” said Martin Young, chief forecaster at the Met Office, the UK’s national weather service.

Gusts of 60 to 70 mph are forecast in southern parts of England and Wales, with bursts of 80 mph or more in some places.

“While this is a major storm for the UK, we don’t currently expect winds to be as strong as those seen in the ‘Great Storm’ of 1987 or the ‘Burns Day storm’ of 1990,” Young said.

The 1987 Great Storm was responsible for the deaths of 18 people in Britain and four in France. The Burns Day storm left a trail of destruction from the Isles of Scilly to Denmark, killing 100 people, including 47 in the British Isles, according to the Met Office.

The storm could complicate travel conditions through the rest of the week. The Met Office advised people to take precautions and consider staying off the roads until the worst of the winds has passed.