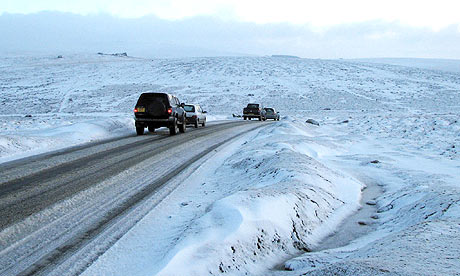 Snow has fallen in parts of Devon in what has been described as “fairly unusual” weather for May.

Winds of up to 100kph also struck the South West coast overnight with a number of trees coming down, some blocking roads.

25cm of snow also fell in Shropshire and people have been warned to prepare for flooding.

Fourteen flood alerts are still in place in Devon and Cornwall following heavy rain on Monday.

Sheila Coates, from Princetown said “It’s crazy. When I went to bed last night I couldn’t see out of my front window for the snow.I’ve lived here all my life and I’ve never known weather like it at this time of year.”

“The last really widespread snowfall in May was 17 May 1955 when much of England and Wales was affected by several hours of snow.

Snow was caused by very wet and windy weather across the region combined with falling temperatures after sunset.

The winds are expected to ease during with the weather getting drier and brighter.

About 12 homes are without electricity in Plympton St Maurice, Plymouth, after a tree crashed through power lines about lunchtime and landed on a parked car.