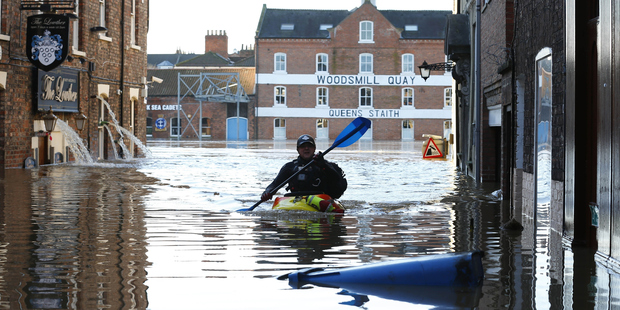 Furious York residents last night demanded to know why a key flood barrier was opened, leaving swathes of the city it was built to protect under water.

Around 600 homes and businesses in supposedly safe areas of the city were flooded for the first time in decades when the River Foss burst its banks following the Boxing Day deluge.

Properties near the river have been saved from flooding for many years by a Â£3.3 million ($7.2 million) barrier between the Foss and the River Ouse, which stops surges of floodwater from topping the river banks.

But on this occasion, as torrential rain caused a dramatic increase in river levels, a decision was made to ‘lift’ the barrier – effectively removing it from the city’s flood defence system when it was most needed.

The Environment Agency said the problem was caused by the adjoining pumping station becoming “inundated with flood water” and disabling some of the electrics inside.

These control the barrier and pumps to contain river levels at times of a flood.

Fearing all pumps breaking down with the barrier in place – which would have made it impossible to discharge excess floodwater from the Foss – the agency took the decision to lift the barrier. But this allowed water from the Ouse to flood into the Foss, causing its level to rise and its banks to burst.

One resident, Janice Findlay, said: “We have always felt safe because we have always had that barrier and this is absolutely shocking because it’s the first time in 36 years that this part of York has flooded.”

Linda Horsman, 64, who owns two flats in the flood zone with husband Paul, 68, said of the barrier failure: “It’s stupid and it makes me very angry. We are now having to face the consequences.”

Council leaders said an investigation into the barrier’s failure would be now carried out.

York is particularly susceptible to flooding as the rivers Ouse and Foss join in the centre of the city. It has been hit by regular floods for centuries and Â£10 million has been spent on a complex defence system of barriers, banks and pumps to limit the damage.

The Foss Barrier was built in 1987 because floodwater from the Ouse was forcing water back up the Foss and causing it to burst its banks.

A 16.5-ton barrier that can be lifted in and out of position was built to separate the two rivers and isolate the Foss from the Ouse at times of flood. Eight pumps divert 30 tons of water per second around the barrier to ensure a continuing flow from the Foss into the Ouse and keep river levels under control. In 2000 – when 500 properties were flooded and the River Ouse reached the highest ever recorded level in York – the Foss Barrier was able to protect properties that yesterday flooded.

A spokesman for the Environment Agency said last night the barrier could be operating again today. “We are doing everything we can and making urgent repairs to ensure the pumping station is operational again as soon as possible and a helicopter will be airlifting in parts to complete the repairs tomorrow.”

Many residents took to social media to vent their fury at the Foss Barrier shambles.

Gillian Scott, 50, had been renovating her Â£180,000 ground floor flat near the river and preparing to move in when the floods struck. She condemned the Environment Agency for the devastating damage to supposedly “safe areas” of the city.

She said: “We have never had to worry about flooding because the barrier was there to protect these homes. They made the decision to raise the barrier and that’s why all this has happened.

“I’m very disappointed. It’s totally down to the Environment Agency.”

Andrew Waller, the city councillor responsible for the environment, admitted: “We need to sort out the Foss Barrier. The raising of the barrier is the biggest question we will be raising after the event.”

He said the pumps at the barrier were due to be replaced but “no immediate urgency was given to the work” by the Environment Agency.

The city’s mayor Sonja Crisp said immediate action was needed to sort out the problem.

“If it wasn’t fit for purpose then something needs doing and needs doing immediately,” she said.