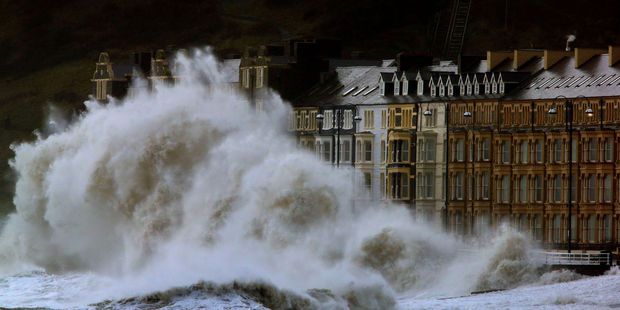 More flooding is expected across Britain today as the west coast braced for the arrival of “Winter Storm Hercules”, the system which has left behind a record-breaking deep freeze in the US.

Waves have been recorded as high as 27ft (8.2m) at Land’s End, and reports on surfing forecast websites suggested scores of professional “big wave chasers” were tracking Hercules’ movements across the Atlantic.

The Met Office’s chief forecaster said a “large, deep depression” was whipping up waves out to sea, and the system of low pressures continues to move “northeastwards across the Atlantic”.

Nicola Maxey, a spokesperson for the Met Office, confirmed that Britain was faced with the same system that had led to such extraordinary conditions in the US over the past week.

She added that the storm was “a different beast” after moving across the ocean, picking up water but also gaining heat. It was forecast to pass to the west of Scotland later today, and though not crossing the country led the Met Office to issue severe weather warnings for rain and 70mph winds along the coast.

Meanwhile, the transport networks were hit with widespread disruption today as commuters tried to return to work after the Christmas and New Year holidays.

Heavy rain fell across the majority of the UK last night, and with rivers high and ground saturated by the worst series of winter storms to hit Britain in more than 20 years, the Environment Agency said flooding was “expected” in almost every region of England and Wales.

Residents in coastal areas were advised to be particularly cautious, with the strong winds set to cause “exceptionally high waves”, the Met Office said earlier.

Yet the effects of the storm will also have been felt by those returning to work this morning.

First Great western warned passengers there was a risk to services in Cornwall, Devon, Somerset, Wiltshire and Dorset.

South West Trains services between Fulwell in south-west London and Shepperton in Surrey were not running due to flooding, BBC News reported, while major roads in areas including Pembrokeshire, West Sussex, Gloucestershire, Berkshire, Somerset and Devon were also closed.

The Thames Barrier was in operation last night, while the Environment Agency urged communities in Dorset and Oxfordshire to brace for “significant flooding” in the lower reaches of the Thames, Dorset Stour and Frome rivers.

The agency also estimated that around 220 properties in coastal areas have been flooded so far.

The storms were believed to have claimed three lives over the course of the past week. In Oxford, a 47-year-old man died when his mobility scooter fell from a flooded path into a river.

A 27-year-old man from Surrey was found on Porthleven Sands beach in Cornwall after he was swept out to sea on New Year’s Eve night and a woman died after being rescued from the sea in Croyde Bay, north Devon.

Searches were still going on over the weekend in south Devon for missing 18-year-old university student Harry Martin, who was last seen leaving his home to take photographs of the weather – with more than 100 people volunteering to look for him.

Jonathan Day, flood risk manager at the Environment Agency, warned that the risk of flooding continued this week.

He said: “Although high tides are now falling, there remains a risk of coastal flooding, especially on the south and west coasts.

“In addition, wet conditions have left the ground saturated in many areas, increasing the risk of river and surface water flooding.

“We would urge people to be prepared by checking their flood risk, signing up to free flood warnings and keeping an eye on the latest flood updates,” Mr Day said.

At least the UK is not freezing as the US is at the moment.

With the big freeze going on, does that mean global warming is getting worse??

Yep! The IPCC is working on it