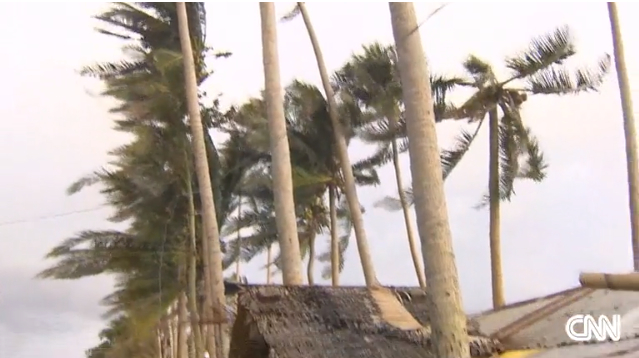 A massive typhoon made landfall in the central Philippines late Saturday (Sunday NZT), battering the area with heavy rains and winds a year after Super Typhoon Haiyan devastated the region.

Typhoon Hagupit, whose name means “lash” in Filipino, came ashore on eastern Samar Island just before 10 p.m. with winds of 205 kph (127 mph) — the equivalent of a Category 3 hurricane.

Storm surges of up to 15 feet and heavy rain from the slow-moving storm were some of the main concerns as the storm headed west-northwest. Hagupit is still expected to make a second landfall, hitting the island of Masbate on Sunday.

About 40 million people are in the path of the storm’s winds. Though the storm will weaken as it moves over land, it is expected to remain a typhoon before it moves out to sea on Tuesday.

Rainfall amounts are a concern because Hagupit is moving slowly on its west-northwest track, at 15 kph (9.3 mph). At that rate it will take about three days for the storm to travel past the capital, Manila, dumping extreme amounts of rainfall — more than a foot in some places — as it goes.

That will lead to flash flooding and mudslides, even in places far away from the storm’s center.

Hagupit should be significantly weaker by the time it reaches Manila on Monday evening, but winds will still be higher than 100 kph (60 mph). The biggest threat in the capital will come from the heavy rainfall, leading to urban flash flooding.

Perhaps most at risk Sunday was the city of Legazpi, just north of where Hagupit made landfall. The city faces a possible storm surge of 2-4 meters (6.5 to 13 feet), enough to have a significant impact on the coastline.

Legazpi could see a foot of rain in addition to damaging winds.

Public storm warning signals have been applied in a number of provinces amid predictions winds could rip off roofs, cut power and damage buildings. Residents in low-lying areas have been warned about possible flash floods and landslides.

More than 600,000 people had evacuated by Saturday morning, according to the National Disaster Risk Reduction and Management Council.

Still, a CNN crew in Legazpi saw many residents who were ignoring evacuation orders and vowing to stay in their makeshift beachside homes.

“I think we can handle the situation. If or when it gets worse, we’ll go to the evacuation center,” one man said.

“We’be been here 25 years and seen many typhoons,” said a woman at the coast. “This one already feels stronger than Typhoon Haiyan, but we won’t leave yet.”

Farther south, in the city of Tacloban, where memories of Haiyan are still fresh, the streets were empty because residents had already evacuated. The super typhoon devastated Tacloban, killing more than 6,000 people and making around 200,000 people homeless.

“There was a lot of preparation,” Orla Fagan, spokeswoman for the United Nations humanitarian agency OCHA, told CNN. “I think that the lessons learned were very hard ones in Tacloban … because there were so many lives lost, and I think they’ve really taken cognizance this time and really made an all-out effort everywhere to bring people to safety.”

The U.N. agency is ready to respond with food, nonfood items like pots and pans, hygiene kits, and medical equipment, she said.

More than 80 domestic flights were canceled, according to the National Disaster Risk Reduction and Management Council.

Schools, businesses and government offices closed at the end of the week to give people time to prepare. Government agencies stockpiled tens of thousands of canned food packages in case of shortages.

Shop owners nailed boards on windows to protect them from wind, while fishermen moved boats onto dry land.