Two lows, but not twice the power 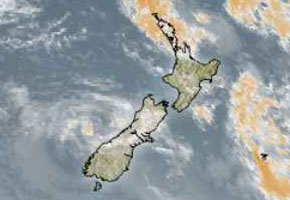 A second low has developed off the coast of Canterbury today, this complex low is weakening over the South Island and will move southwards during the rest of today.

The West Coast of the South Island is still getting a fair amount of rain, the most rain for the past 24 hours around the country has been about Reefton which has received 38.2 mm. The warmest temperatures are on the east coast of the North Island with Napier currently the warmest on 22 degrees. Dunedin conversely is the coldest main centre on 8 degrees.

Jet stream cloud is moving across the upper North Island, temperatures are mainly pleasent and as mentioned before the east coast being the warmest spot to be.

Wind is not much of an issue about the country today, Westport through to Hokitika is the windiest area with breezy northerlies averaging from 30 to 40 km/h.