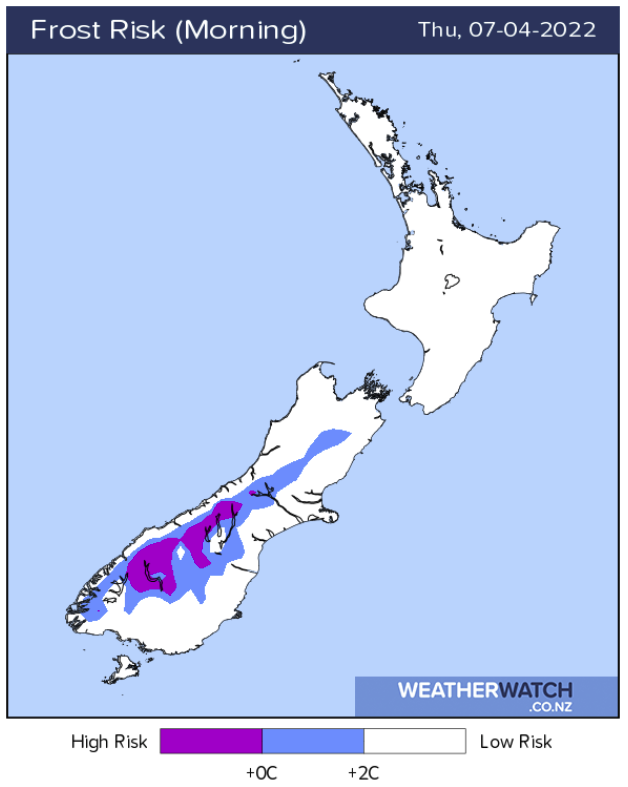 WARM IN THE EAST, WET IN THE WEST

A northwesterly airflow lies over New Zealand today with showers for the western North Island and rain for the West Coast, eastern regions as a matter of circumstance are dry and warm with temperatures reaching into the mid twenties for some spots. The eastern North Island will be the warmest of all.

The upper North Island despite having a few showers about still warms up though with high’s peaking around 23 or 24 degrees.

COLD FRONT DUE TONIGHT ABOUT THE FAR SOUTH

Southwesterlies become strong to gale force about eastern coastal areas on Wednesday then hitting Wellington and coastal Wairarapa in the evening.

The final piece of the puzzle is there is some cold air moving onto the lower South Island later on Wednesday and this brings a few snow flurries to about 700 or 600m for Southland and Otago. Precipitation levels are minimal so any snow flurries aren’t likely to cause any issues but it is a sign winter is getting closer.

COLD SOUTHERLIES THEN AN ANTICYCLONE, WHAT DOES THAT EQUAL? FROSTS

An anticyclone starts to nudge in a little from Thursday as southerly quarter winds over New Zealand ease, this means potentially a frosty start for inland parts of the South Island in the morning. Friday and Saturday mornings have a risk of frost also. Keep up to date with the coming frost risk here.