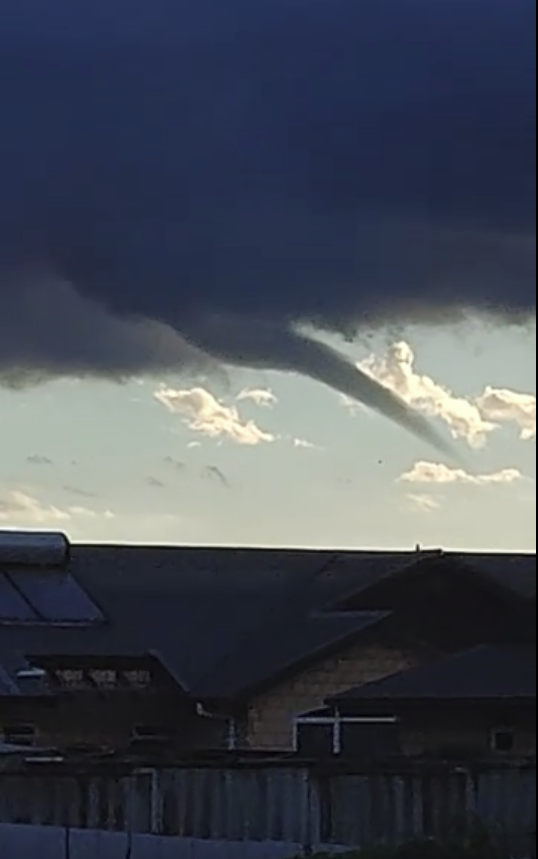 Here’s what is making the weather headlines today

Well we did end up getting some rotation for the upper North Island yesterday, the really heavy rain and more dramatic lightning occurred in the morning especially for the likes of Auckland then later in the afternoon more storms formed which showed more structure to them and a few funnels developed.

Here is a funnel cloud sighted near Morrinsville (Waikato) at 6.30pm. This still is taken from footage filmed by Daniel Grover.

There was some gnarly looking clouds moving through Auckland on the North Shore some time between 4:30 and 5:00pm. This photo below taken by Graeme Williams, Graeme noted there was “furious scud action” with this cloud which may indicate some rotation.

This photo below was taken by JP Mower from Whangaparaoa looking across to Mahurangi West at 5.05 pm. JP noted at one point he saw 3 funnels at the same time, “Never seen anything like it” he said. The photo below may be teetering on the edge of funnel action but at this stage looks to be more like some active looking scud.

Yes there is a chance of more unstable showers today for the North Island, meaning thunderstorms in other words. Please keep up to date with today’s thunderstorm outlook here.

Some heavy rain looks to move into East Cape, Gisborne and perhaps Hawkes Bay overnight and hangs around tomorrow at times then really builds later tomorrow and through to Thursday morning. Keep up to date with our latest rain maps here and the latest watches and warnings from Metservice here.

I also would like to know more about “Scud” too, as it is a new term to me also and one I associate with missiles as does Richard.

Please tell us more about ‘scud’.
The last time I heard that term, it was in reference to Operation Desert Storm.
I didn’t know it was meteorological phenomena!

There you go, some more info on scud cloud! 🙂