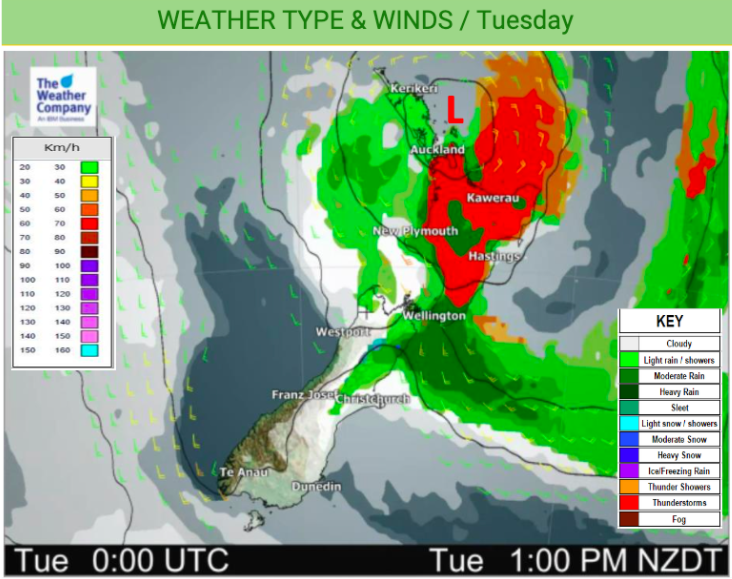 Low pressure remains stalled over the North Island and while it’s a fairly weak low it’s combining with that colder southerly flow over the South Island.

Meanwhile the South Island is again smothered by a fair bit of high pressure, especially in the southern half. Further north and rain brushes Marlborough with showers and drizzly spells around Nelson and North Canterbury.

The South Island also has the most extreme difference with temperatures compared to normal as eastern areas deal with the colder, cloudier, airflow and western areas push up over 8 degrees above normal.

Refer to your local HOURLY forecasts to make more sense of what this all means for you locally. To drill down even deeper, head over to www.RuralWeather.co.nz for more.

Northland, Auckland, Waikato & Bay Of Plenty:
Areas of rain and showers. Some long dry spells. Risk of an isolated thunderstorm inland. Variable winds due to low pressure nearby.
Highs: 14 – 20

Eastern North Island
Patchy areas of rain with some heavy falls – also some dry spells possible. Risk of an isolated thunderstorm in northern Hawke’s Bay or Gisborne later in the day. Variable winds with low pressure over the area.
Highs: 14 – 18

Wellington
Another wet, cool, day with south to south east winds.
High: 11 or 12

Canterbury
Cloudy at times, especially in North Canterbury. Cool east to south east winds. Might be a few showers or drizzle patches, mainly in the north.
Highs: 12 – 14

Southland & Otago
Mostly Sunny, especially inland where it will be warmer. Coastal Otago has a cool day with cloudy periods. Light winds
Highs: 12-20