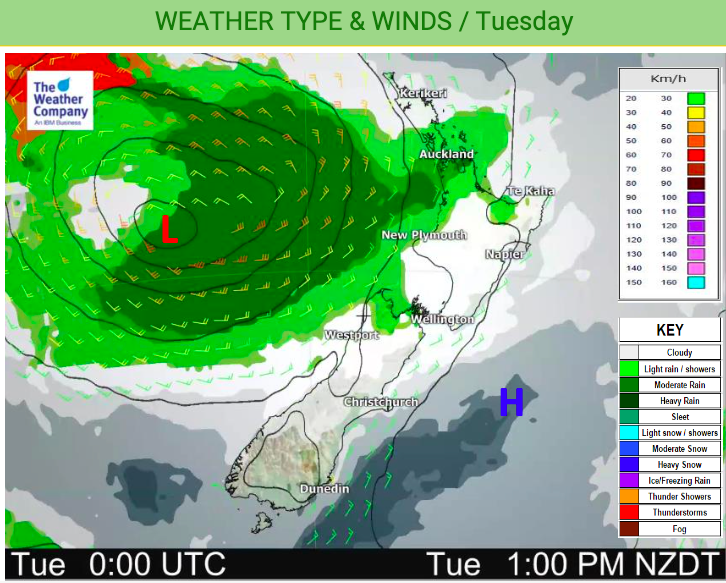 Clouds thicken today, rain develops and winds get stronger as a large low in the Tasman Sea rapidly forms and peaks in power.

By Wednesday it will be moving in to New Zealand and starting to weaken.

Rain will spread down NZ today with heavy falls tonight and overnight.

Winds from the northerly quarter ramp up today too.

This is an evolving situation – some maps and forecasts may date faster than usual, so for the most precise rainfall estimates, wind directions and wind speeds we suggest you drill down into the HOURLY data for you locally. You can do this at WeatherWatch and also via www.RuralWeather.co.nz.

Northland, Auckland, Waikato & Bay Of Plenty
Mostly cloudy with showers developing and North to NW winds winds becoming stronger across the day. Showers more likely to turn to set in rain at night, especially south of the Bombays. Heavy rain from Waikato southwards but lower accumulations the further north you go.
Highs: 19 – 24

Western North Island (including Central North Island)
Light winds or calm to start the day then N to NE winds strengthen, becoming strong in Taranaki especially later in the day as the centre of the low moves in closer. Rain develops with heavy falls later, especially around New Plymouth and Mt Taranaki.
Highs: 13 – 18

Eastern North Island
A mix of sun and cloud with light winds. Clouds and N to NE winds increase as the day wears on. Rain develops later in the day or at night. Rain will be heaviest in Wairarapa to begin with.
Highs: 16-18

Wellington
Some early sunny spells possible otherwise clouds increasing with North to NE winds. Rain develops later in the day or at night with some heavy falls overnight.
High: 16

Canterbury
Cool inland to start with. Breezy to brisk E to NE winds with a mix of sun and cloud and clouds thickening. Rain developing at night in the north.
Highs: 13-16

Southland & Otago
A mix of sun and cloud with clouds increasing. Southerlies in Southland and nor’easters in coastal Otago – calm inland. These various winds mean that a few afternoon showers are possible inland.
Highs: 14-20