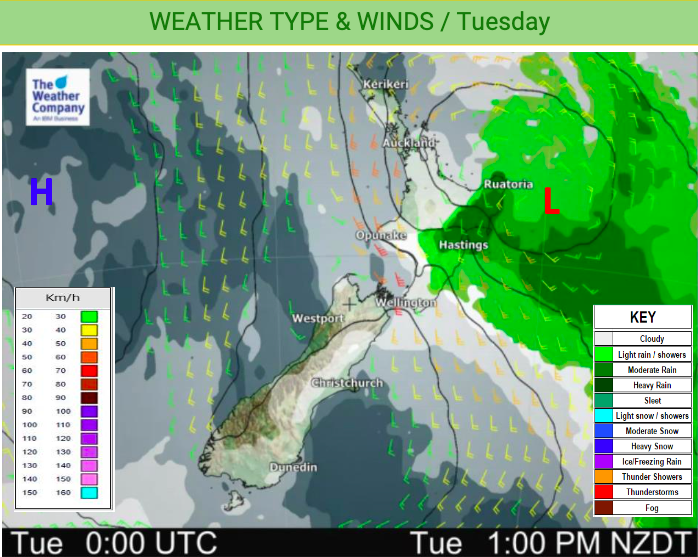 Rain and showers will also impact the North Island, mostly on the eastern side up to about Gisborne.

The South Island, however, is much more settled with growing high pressure although that southerly may be windy from Canterbury to Marlborough, especially in exposed coastal areas with gales around Marlborough for a time before easing.

It will be a cold start for inland parts of the South Island too – but a fairly mild day ahead.

The eastern North Island will be several degrees colder than average with some parts of Hawke’s Bay experience daytime highs only 1 degree above the overnight lows! The West Coast over in the South Island, on the other hand, is warmer than normal.

Seas will also be dangerous from Taranaki to west Auckland to western Northland. Big waves and gales combined means it’s not a day to go fishing on the rocks or out on a boat.

Here are the regional forecasts for Tuesday… As always, for highly local details please refer to the HOURLY forecasts at both WeatherWatch.co.nz and www.RuralWeather.co.nz.

Northland, Auckland, Waikato & Bay Of Plenty
A mix of sun and cloud with windy southerlies, possibly gale in Auckland. Showers more likely in Waikato and BOP (nearer to the centre of the low).
Highs: 16-23

Western North Island (including Central North Island)
Morning rain or showers easing and clearing and dry by – or across – the afternoon. Cool S to SE winds, gale force around Cook Strait and Taranaki.
Highs: 12 – 16

Eastern North Island
Rain easing in the south but continues further up into Hawke’s Bay and Gisborne as the centre of the low moves in. Cool southerlies developing. Some daytime highs only a degree or two warmer than the overnight lows!
Highs: 13-16

Marlborough & Nelson
A cool start then a mild afternoon with passing clouds. Might be some early wet weather but clears. S to SE winds gale through Cook Strait and exposed areas.
Highs: 17 – 21

Canterbury
A cold start around Twizel and Tekapo and fairly cool on the plains too. S to SE winds continue. A mix of sun and cloud.
Highs: 14-17

Southland & Otago
A cold start to the day with temperatures increasing though. A mix of sun and cloud with S to SW winds for many, lighter variable winds inland.
Highs: 13-20