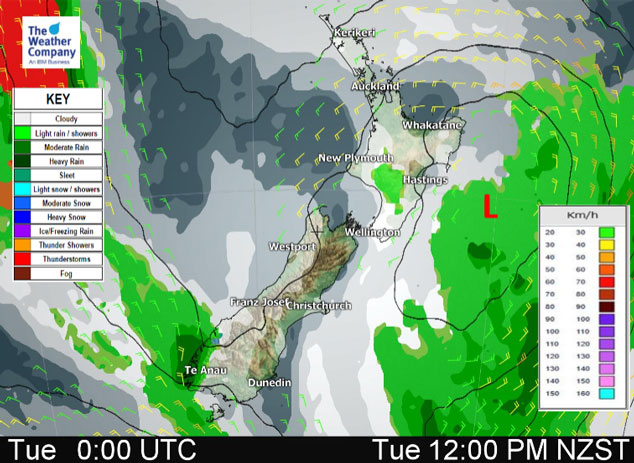 A low pressure system slowly moves away to the east of the North Island today meanwhile a ridge moves in in behind.

Expect some cloud and the odd shower for the upper North Island (especially in the west) then clearing away in the afternoon and sunny areas increasing. Breezy southwesterlies ease in the evening. A few morning showers for the lower North Island, becoming mainly dry in the afternoon and sun starts to break through, south to southwesterly winds. The odd shower may linger about the Central Plateau and East Cape till evening.

Mostly sunny for the upper South Island, some cloud about coastal Canterbury (mainly Banks Peninsula) and Marlborough may deliver an early shower then clearing away. Winds are mostly light. A cloudy day for Fiordland with showers, especially from afternoon. Southland and Otago is mostly sunny with some high cloud, some mid level cloud for a time in the afternoon. Winds from the north or northwest.

Highs range from 14 to 19 degrees across the North Island, the warmest highs likely about Bay Of Plenty, the coolest about Wellington and the Central Plateau. Highs between 14 to 16 degrees from Southland and right up the east coast through to Nelson. Temperatures between 13 and 15 degrees along the West Coast.