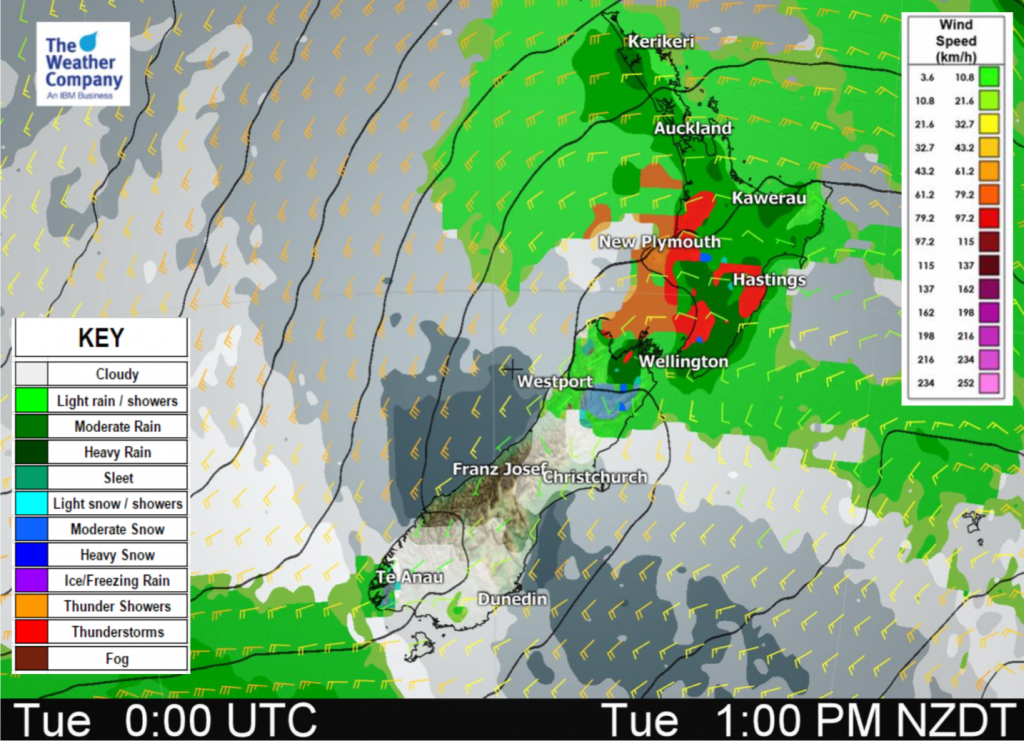 A cold southwesterly airflow lies over the country today, a cold front within this flow moves off the upper South Island this morning then onto the North Island this afternoon.

Northland, Auckland, Waikato & Bay Of Plenty
Showers, heavy with possible hail / thunder in the afternoon and evening then clearing at night. West to northwest winds change fresh southwest in the afternoon.
Highs: 13-15

Western North Island (including Central North Island)
Cloudy, the odd shower turns to rain by midday, clearing later in the evening. Snow lowers to 600m for a time about the Central Plateau. Northwesterlies change southerly in the afternoon.
Highs: 9-13

Eastern North Island
Some early sun possible then rain moves in by midday as light winds tend southerly, rain clears around midnight. Coolest daytime highs about Wairarapa, warmest about Gisborne. Some snow may lower to 600m for a time.
Highs: 13-17

Wellington
Rain develops in the morning with a southerly change, clearing late afternoon. Some snow to 500m.
High: 11

Marlborough & Nelson
Dry to start then showers move in late morning, clearing late afternoon or evening. May be some small hail at times. Some snow to 500m.
Highs: 11-13

Southland & Otago
Chance of a morning shower about Southland then expect sunny areas and increasing high cloud, rain develops later in the evening or overnight as westerlies tend northwest. A mix of sun and cloud about Otago, overnight rain.
Highs: 9-12